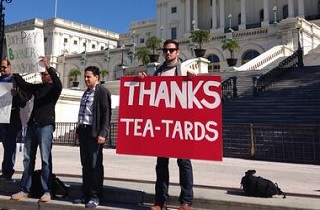 Since Tea Party patriots protested under a Confederate flag at the White House Sunday, and at several other locations, conservatives have been littering my Twitter timeline with demands that I denounce a sign that appeared at an Organizing For America event, which read “Tea-Tard.”

The premise is that the “Tea-Tard” sign somehow cancels out the throngs of conservatives chanting along with the Confederate flag guy, and chasing off a black man who stopped to dissent.

First of all, I already have denounced the sign, and all such permutations, many times. It’s not exactly the same as, or anything like, the Confederate flag, but if it makes conservatives feel better about their racist protest, yes, the “Tea-Tard” sign is unequivocally offensive:

The use of the “tard” appendage has become ubiquitous among dozens-doers of every stripe, with popular variations like “libtard,” “Teatard,” and probably to mock Dr. Who fans as “Tardistards.” It’s likely that many of these people would not use the word “retard,” an offensive term for disabled people, in similar contexts, which is why I’m bothering to write this at all. It’s my suspicion that Jon Stewart is among those who would not normally say “retard,”and is probably unaware of the harm that the shortened version carries. Now, he knows.

This is a free country, and as such, every American is free to mock disabled people, and to use whatever words they want. So-called “political correctness” is not “word-policing,” it is simply the act of letting people know how what they are saying makes other people feel, and the ways in which it affects how they are seen. You’re free to call someone a “libtard,” or a “Repubutard,” or even a “retardtard” if you want to, but you should do so with the knowledge that you’re harming people who are nicely asking you not to.

You might also be interested to know that I’ve even denounced the use of the term “Teabagger” to describe Tea Partiers.

Thankfully, no one is fighting and dying to enslave special needs people, but even though there’s no relationship between the two stories, Buzzfeed‘s Evan McMorris Santoro reports that they’re even less related than they appear:

The man holding the sign at the protest, David Roper, tells BuzzFeed he was not affiliated with OFA, nor did OFA know he was going to show the sign he held when he showed up at the group’s protest.

“I was on the mall this morning to attend the military veterans #endtheshutdown event at the WW2 memorial,” he said in an email interview. “When it ended I walked to the capitol building to see what was afoot.”

The sign was only displayed for a few minutes, Roper said.

“Nobody from OFA saw the red sign until I was already standing beside the OFA people,” he said. “They moved shortly afterward (within probably 5 minutes) onto the lawn and I went home.”

McMorris-Santoro also reports that OFA denounced the sign, which wasn’t theirs, and which they moved away from when they noticed it.

But even if they hadn’t, that would not make the Confederate flag protest any less racist, and this is not a matter of keeping score. We don’t call out racism to get racism Bitcoins, we do it so that people will stop being racist.