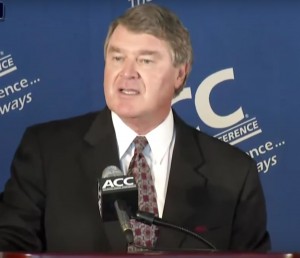 The Atlantic Coast Conference has followed the lead of the NCAA, the NBA, and a number of high-profile entertainers in becoming the latest to relocate events from North Carolina because of the state’s controversial “bathroom law.”

The Associated Press reports that the ACC’s Council of Presidents voted to move 14 championship events from the state this year — including, most notably, the conference’s championship game in football. Per the AP report, the ACC will not hold future events in the state until the HB2 law — which is widely seen as being anti-LGBTQ — is repealed.

“The decision to move the neutral site championships out of North Carolina while HB2 remains the law was not an easy one,” said Clemson president James P. Clements, who chairs the ACC’s council. “But it is consistent with the shared values of inclusion and non-discrimination at all our institutions.”

The move is particularly noteworthy given that the ACC is headquartered in Greensboro, N.C., and member schools Duke, North Carolina, North Carolina State, and Wake Forest all hail from the Tar Heel state.

The state of NC has lost millions upon millions in economic impact between NCAA, ACC, NBA decisions. ACCCG Eco impact about 32 mill alone.

The ACC will need to move quickly to find a replacement site for the football game, which is set to be played on Dec. 3.