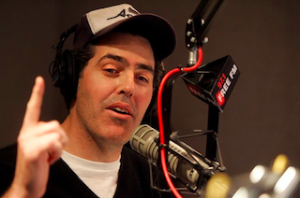 Adam Carolla wants “Big Brother” to know he’s fine with them listening to his cell phone conversations. The comedian and popular podcast host laid out his views Friday in light of the ongoing Boston Marathon bombing investigation. “Big Brother doesn’t give a fuck about me and my cell phone conversations,” Carolla said, and he thinks anyone else who’s abiding the law should feel the same way.

Speaking about the Boston suspects and what authorities could have done to prevent last month’s attack, Carolla said, “If you’re involved with this, and you’re going to the mosque, and you’re preaching radical shit, and you’ve got a YouTube channel devoted to blowing stuff up, then we need to look at you.” He said when civil libertarians start warning about “Big Brother” and its increased power after events like this, he likes to remind them what would happen if the government was listening to his cell phone calls.

“All I do is complain about shit and I don’t talk about anything,” he said. “And Big Brother doesn’t give a fuck about my cell phone conversations, because it’s just me talking about cars and complaining about asshole producers I have to work with.” He joked, “It’s rarely speaking about jihad.”

Carolla didn’t exactly think that the increased surveillance was guaranteed to help prevent more attacks, calling those who would be listening “fuck-ups, like everyone else in the government,” but at the same time he doesn’t understand the point of view of someone who doesn’t want them looking at their emails. “Knock it off narcissist,” he said, “they don’t give a fuck about you and your stupid emails.”

Turning the conversation to video surveillance, Carolla ironically appeared to echo a point made by Sen. Rand Paul (R-KY) about not objecting to the “technology” of drones in theory. Carolla said a camera in and of itself is “not good, it’s not bad, it’s not anything.” Shifting his analogy to guns, he added, “It’s like a gun. You put it in a gang-bangers hand it’s bad. You put it on a cop, it’s probably good.”

Carolla concluded his point by saying, “if you’re going through your life, and you’re paying your taxes… and you’re not robbing anybody, then the camera’s your friend.” It’s an argument often made by proponents of increased surveillance, and one often challenged by those who, for what ever reason, don’t want to be watched.

Listen to the NSFW audio below, via The Adam Carolla Show: