After Melania Trump Said She Didn’t Like Her GQ Profile, Its Author Got Anti-Semitic Threats 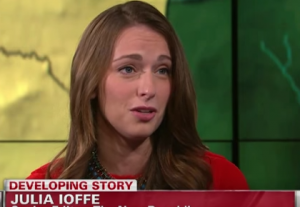 Yesterday, the GQ profile on Melania Trump hit the Internet like a ton of Slovenian bricks. She has been extremely quiet during this election season, which the profile sheds light on by highlighting her “traditional” views of her marriage and role within it. Her noted reticence made the feature on her all the more interesting, especially since, thus far, her impact on the campaign has been dictated by others‘ narratives, not her own.

Interestingly, she kept the focus on herself last night by speaking out about the profile, calling it “dishonest.” She railed especially hard against the woman who did the reporting, saying, “Julia Ioffe, a journalist who is looking to make a name for herself, clearly had an agenda when going after my family.”

Whether Ioffe went “after” Trump’s family back in Slovenia is a matter of opinion and depends completely on what you feel a journalist’s role really is. What is less of a matter of opinion is the fact that supporters of Trump’s husband, Donald Trump, are going “after” Ioffe with force.

To warn you, the following tweets are very antisemitic.

So @juliaioffe wrote the Melania piece every pub has been wanting to get & this is how Trump supporters responded. pic.twitter.com/TA8bmoz1Ru

From my inbox. Subject line: “They know about you!” pic.twitter.com/zp3v2GjTeI

.@GideonResnick @OKnox Oh, I thought this one reminding me to swallow my diamonds was from you! pic.twitter.com/Ri6tZsyHXx

The Jewess @juliaioffe seems a bit salty she’ll never be or look like a trophy wife. You’re the reason why I canceled @GQMagazine.

Ioffe’s colleagues in the media have begun defending her…

Since everyone online today seems to be sharing photoshopped images about @juliaioffe being Jewish, I made one, too pic.twitter.com/nBDTor7p8q

#ff @juliaioffe for being a fantastic journalist and somehow maintaining a sense of humour when all around her would be losing theirs.

…as has the Anti-Defamation League…

@juliaioffe Yes, will forward to our research team. Can you DM with more info?

…because she has started receiving scary phone call.

Now I’m getting phone calls from a blocked number that play Hitler’s speeches when I pick up. Sad!

Just got a call from “Overnight Caskets.”

Today has a unique meaning to the journalist, too.

For those among you who appreciate irony: my family arrived in the US (legally) 26 years ago today. We were fleeing anti-Semitism.

As of this posting, she has not tweeted in about 50 minutes. Here’s hoping all is well.