Left and Right Alike Jump to Conclusions After VA Shooting

After WDBJ Shooting, Left and Right Embarrass Themselves in Race to Judgment 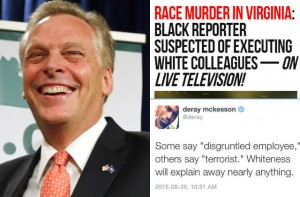 Maybe once — just once — we can have a mass shooting situation where everyone agrees to take a deep breath and wait 24 hours before throwing blame and offering political remedies. But alas, in the wake of horrific death of two journalists on live television in Roanoke, Va., yesterday, the reaction from journalists, politicians, and those on the right and left alike was to jump to the conclusions that most coddled their preconceived views.

First out of the gate was Democratic Virginia Gov. Terry McAuliffe. In a radio interview mere hours after the shooting, McAuliffe spoke briefly about the manhunt for suspected shooter Vester Flanagan, before immediately pivoting to the need for more background checks. “It goes back to what I’ve talked about for a long time: there are too many guns in the hands of people who should not have guns,” he said.

McAuliffe’s push for background checks came despite there being literally no evidence about whether Flanagan was mentally insane, had ever been institutionalized, had ever been arrested, had anything on his record that would show up on a background check, or if he had even obtained his gun legally. As it later turned out, Flanagan had passed a background check in order to purchase the gun. But that didn’t stop McAuliffe from going on CNN the next morning to push background checks again, even though it was already a matter of public knowledge that he was pushing a bogus solution.

But the most embarrassing assumption of the day probably belongs to well-known #BlackLivesMatter activist Deray McKesson. Turns out that when your life’s goal is to racialize every single controversy, eventually you end up jumping to embarrassing conclusions: 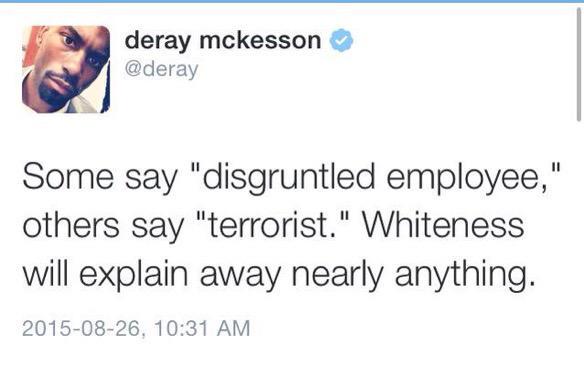 Deray’s now-deleted tweet (and dozens like it from other #BlackLivesMatter activists) appeared to be based on faulty reporting from Internet detectives who looked at the camera image of Flanagan captured during the assault, and said, “Yep, looks white to me.” Here, for the record, is that image: 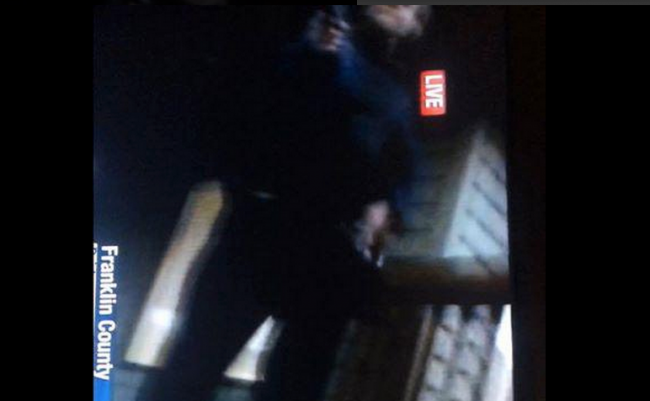 I don’t know how anyone could assert as fact using that image that the killer was Caucasian-American, African-American, Hispanic-American, or anything other than Blurry-American. These same Internet detectives also dragged up a picture of the murdered journalists posing for a picture with an innocent man who looked nothing like the killer, and spread his face across half the Internet calling him a murderer.

McAuliffe and Deray’s ideology-flattering preconceptions ended up with them getting egg on their faces. But let’s examine a case where a political actor’s prejudices were eventually proven correct: Conservative website Breitbart’s blaring red-font headline that the attack was a ‘RACE MURDER’ at the hands of a ‘BLACK REPORTER’: 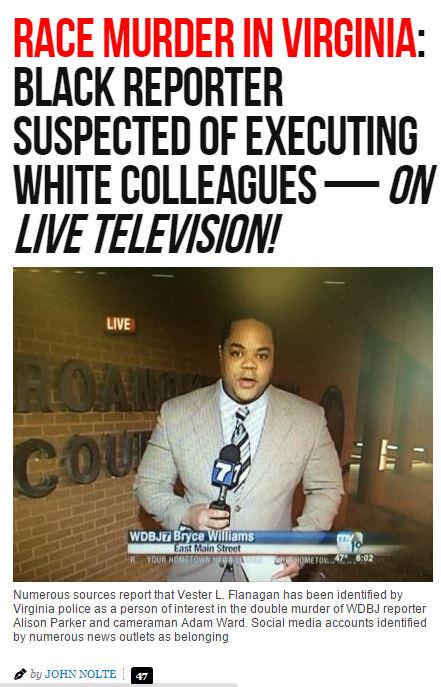 The basis for Breitbart’s characterization was that after murdering 27-year-old reporter Alison Parker and 24-year-old Adam Ward, Flanagan accused Parker of saying racist comments on social media. Of course, in the same tweetstorm, Flanagan also complained that Ward went to human resources to complain about him, but they didn’t find that grudge quite as newsworthy.

Despite Breitbart’s insistence in the body of the piece that a “racial motive [is] suspected,” law enforcement officials at the time stated more soberly that Flanagan was a “disgruntled former employee” (see the above Deray tweet). The headline led to a round of condemnation from other media figures, who accused Breitbart of race-baiting and focusing only on the most incendiary motives.

Now, as it happens, evidence has since come to light bolstering the argument that Flanagan’s attack was partially motivated by race. In a fax sent to ABC before the murders, Flanagan claimed to have been inspired by the murder of nine African-American parishioners in Charleston, North Carolina, buying his gun immediately afterward. “As for [Charleston killer] Dylann Roof? You (deleted)! You want a race war (deleted)? BRING IT THEN YOU WHITE …(deleted)!!!” he wrote.

So should Breitbart get any credit for accidentally jumping to the correct conclusion? Hell no. Breitbart’s history of making assumptions has historically led to laughably bad reporting, and they don’t get to crow now that their preconceived notions happen to align with the truth about an obviously psychopathic killer. If they wanted their clickbait headline about how a scary black man killed a pretty white girl out of racial rage, they could have had it… a few hours later, when the facts were clearer.

In all breaking mass casualty events, there are bound to be some moments of erroneous reporting. For example, nearly every national media outlet (Mediaite included) incorrectly reported that Flanagan was dead an hour before he actually died from his self-inflicted wounds. But usually those errors arise from understandable assumptions (as well as initial police claims): i.e., people who shoot themselves in the head tend to die immediately.

That’s what makes Breitbart, Deray, McAuliffe, and thousands of others like them so much worse. They didn’t jump to conclusions out of ignorance or because they made an honest mistake. They jumped to conclusions because there was gain involved, whether it was political capital, Internet traffic, retweets, or just scoring a cheap ideological point.

They didn’t arrive at the wrong conclusion, they just didn’t give a damn about the correct conclusion. And for that, they should be ashamed.