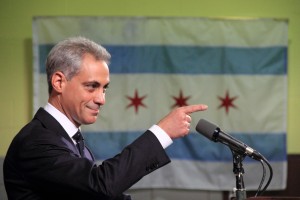 One of Chicago Mayor Rahm Emanuel‘s aides was allegedly assaulted at a prayer vigil held for Quintonio LeGrier and Bettie Jones, both of whom were shot and killed by police over the weekend.

The Chicago Tribune reports Vance Henry and 28th Ward Alderman Jason Ervin were accosted by two assailants outside of the prayer vigil, which was held Sunday evening. Ervin relayed the matter to the city paper, which confirmed certain details with the official police report:

The man told Henry that he “should go back downtown,” Ervin said. At that point, Henry and Ervin told the man to “go home with that . . . We’re here with the family. This is not the time and place for this,” Ervin said.

The whole thing lasted about 20 seconds. Ervin and several others nearby intervened, pulling the two assailants off of Henry. The mayor’s aide claimed that he recognized one of the two attacked from a prior altercation at city hall, but couldn’t remember the individual’s name.

Mayor Emanuel cut short his family vacation over the weekend and returned to Chicago to handle the situation after LeGrier and Jones’ deaths were first reported.