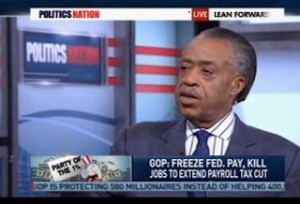 Whenever one talks about advocacy versus straight news coverage, MSNBC — and Fox News for that matter — always point out that they are transparent about the fact that their prime time shows are opinion-based programs, not straight news. Their position, in essence, is that they are coming clean with viewers, so they know to expect opinion intertwined with the news. Fair enough. But that distinction now includes the news ticker at the bottom of the screen, which was the case last night during Al Sharpton‘s PoliticsNation.

It will come as a surprise to no one that the Rev. Sharpton firmly believes the rich need to pay more taxes, and that the poor and unemployed ought to be protected more. Sharpton has never claimed to be a “news anchor,” so seeing him advocate for a position on his 6pm program, PoliticsNation, is not just unsurprising, it is to be expected, and the show appears to be slowly building an audience.

Sharpton had on Senator Bob Menendez (D-NJ) to discuss a payroll tax plan bill that was being voted on in session last night, and during the segment, producers had a ticker run across the screen naming each state, and the number of tens of thousands of “millionaires protected” by the GOP, who ostensibly opposed Menendez sponsored bill, at the expense of some thousands or millions of workers in the state.

These are fair arguments for Sharpton to make on his show, and on his website, but on the ticker? Those tickers have always represented some form of breaking news, straight news, not advocacy, so there is a real and legitimate concern that a viewer watching a news network, like MSNBC, would and should expect news, not opinion, there. As a viewer, I now have to presume that not only are MSNBC’s prime time programs pure opinion, but the news tickers as well?

What’s next? Ominous music with a deep voiced announcer coming on and saying “this is a special report” and then Sharpton coming out and announcing that “It’s official, Newt Gingrich is a ne’er-do-well?”

Opinion media has its place in the cable news landscape, but when advocacy has breached the last protected vestige of infotainment – the Ticker — well maybe its time to stop calling it news at all.

Update: a Mediate tipster points out that The Ed Show has been doing these tickers for weeks. This, of course, doesn’t make Ed Schult or his producers any better (or worse) it just suggests that this Ticker-tainment style might be MSNBC policy and not just about Sharpton.

Watch a portion of the segment below, courtesy of MSNBC: