Alabama Mayor, City Councilman Beat the Sh*t Out of Each Other
BOYS WILL BE WHINY BOYS

Alabama Mayor, City Councilman Beat the Sh*t Out of Each Other 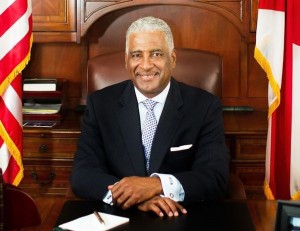 The mayor of Birmingham, Alabama got into a fight with a city councilman on Tuesday in a fight that sent both men to the hospital.

According to the Associated Press, local media covering a city council meeting reported hearing shouts from another room. Both Mayor William Bell and Councilman Marcus Lundy were in the room, allegedly fighting one another in a vicious physical confrontation.

Birmingham police and paramedics were called in to assess the situation. Meanwhile, Bell and Lundy’s people began blaming one another for the fight.

Witness said "Lundy attacked him from behind."

Mayoral spokesperson April Odom suggested that Lundy was angry with Bell since he had to return a city vehicle he’d been using. (Local law prohibits councilmen and women from having municipal vehicles.) During a subsequent press conference overseen by the city council, Council President Johnathan Austin insisted Bell was to blame since he was apparently trying to get Lundy fired for undisclosed reasons.

However, police could not corroborate Austin’s statement as witnesses wouldn’t give statements.

Police: Lundy's assistants, the only witnesses, refuse to give statements to police.

Bell and Lundy’s representatives cited their party’s injuries as evidence of being attacked. As a result, charges and arrest warrants were threatened against both men. When asked for comment on this, however, Birmingham Police Chief A. C. Roper declined to comment.

Both men were taken to a nearby hospital for further evaluation.