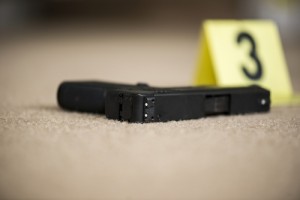 A two-year-old boy in Hoover, Ala. might be responsible for the Tuesday shooting death of his father, according to an official police statement.

The boy’s mother returned home from work to find Divine Vaniah Chambliss, 31, dead from an apparent gunshot wound to the head:

The caller had returned home from work when she discovered an adult family member who was unresponsive. Hoover Fire Department paramedics responded and pronounced the victim, a 31 year old male, deceased on the scene. The victim appears to have suffered a gunshot wound to the head.

On Wednesday, Hoover Police Capt. Gregg Rector told the Washington Post, “you think you’ve seen everything in this line of work and then something like this happens.” He described the whole affair as a “horrible tragedy.”

The investigation is ongoing, and the official results from the Jefferson County Coroner’s Office have yet to be released. However, in addition to revealing the victim’s name, the authorities have also suggested that their investigation has determined that only two people were present at the time of the shooting — Chambliss, and the toddler.

Rector noted that Chambliss’s death “is not a suicide,” and later admitted that they don’t yet know how the child gained access to the weapon. Yet all indications point to the absence of a third party.

“People find it hard to believe that a two-and-a-half-year-old is physically capable of firing a handgun,” the police captain told WaPo. “Sadly, I found numerous examples. It’s not unheard of.”