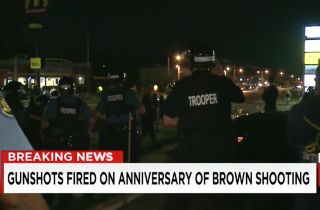 The man who reportedly opened fire on police officers in Ferguson, Missouri on the anniversary of Michael Brown‘s death has been charged with 10 different felony counts.

According to the Associated Press, 18-year-old Tyrone Harris Jr. has been charged with five counts of armed criminal action, four counts of first-degree assault on a law enforcement officer and one count of possessing a firearm. The St. Louis Country prosecutors note that all 10 charges constitute felonies.

Harris opened fire on officers on patrol late Sunday night, just hours after activists marched to mark the first anniversary of Brown’s shooting death. When officers returned fire, Harris was critically wounded. He remains in said condition as of this writing.

St. Louis County Police Chief Jon Belmar explained in a press conference that in-fighting had been brewing among third parties in the area, and that police were sent in to investigate:

At the height of what was already a rowdy protest in which rocks and bottles were thrown at officers, gunshots rang out from the area near a strip of stores, including some that had been looted. Belmar believes the shots came from about six different shooters. It was not clear what prompted the exchange, but Belmar said the groups had been feuding.

At one point, the suspect crossed the street and apparently spotted the plainclothes officers arriving in an unmarked van with distinctive red and blue police lights, Belmar said. He said the suspect shot into the hood and windshield.

Yet Harris’s father contends that the official story of what happened is “a bunch of lies.” Harris Sr. told the AP that two girls, who were with his son at the time, claimed he wasn’t armed. He also said that Tyrone “was a close friend of Michael Brown” and had joined the crowds to pay his respects.