Allison Janney ‘Returns’ to the White House Press Room: ‘I’ll Be Performing The Jackal Later On…’ 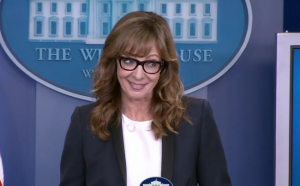 This is the type of story that made half of the Mediaite writer’s room shrug with indifference, while the other half excitedly yelled, “C.J. CREGG!” when we first watched it.

That’s because it features Emmy Award winning actress Allison Janney stepping up the podium of the actual White House James S. Brady Press Briefing Room Friday morning — just like she did for years on the hit Aaron Sorkin-helmed drama The West Wing.

Janney won her first several Emmys portraying the fan-favorite Cregg, who was the Press Secretary for the show’s Commander in Chief: Martin Sheen, aka New Hampshire’s own Jed Bartlet. “The President is still working on his jokes for the White House Correspondents’ Dinner,” Janney joked to the room.

She further clarified with a niche line sure to make West Wing fans laugh with insider fondness: “It is Friday, which means that at half-past-five, I will be performing The Jackal in my office for anyone who is interested or remembers or cares.”

The real reason that Janney was in Washington was to speak to the press about a substantive issue. “I’m here to draw attention to the opioid epidemic and those who are working with others to combat substance use disorder,” she told the gathered members of the press. “This is a disease that could touch anybody… Research shows it works. And courageous Americans show it works every single day.”

Actual Press. Sec Josh Earnest playfully attempted to take back the podium before allowing Janney to finish her statements. Earnest commented with faux-outrage, “This is not your show anymore!”

Janney went as far as to even joke about the fact that after years of portraying the Press Secretary, she was standing in the actual Brady Room. At one point she remarked, “I’m so nervous, I can’t believe…” to a laugh from the crowd.

To play along with the bit, CBS News’ Mark Knoller yelled out, “C.J.! A question!” before asking her to weigh in on who in the 2016 race President Bartlet is supporting.

“I think you know the answer to that question,” she responded.

The Obama administration has long been keen on allowing the actors from the legendary television show to take part in the political process. While many have opined that years of the televised Bartlet presidency helped pave the way for the actual nomination of President Barack Obama, the administration created a digital version of the show’s famous “Big Block of Cheese Day,” to encourage the American public to engage with, and ask questions of, the White House. In this version from 2014, West Wing stars Bradley Whitford and Joshua Malina appear alongside then-Press Sec. Jay Carney to promote the initiative:

And no trip down West Wing Lane is complete without revisiting the bizarre and infamous Jackal scene from the show’s first season, which Janney lovingly referenced above (look for appearances from Whitford, Rob Lowe, Richard Schiff, and the late John Spencer):

—
J.D. Durkin (@jiveDurkey) is a columnist for Mediaite and avid West Wing fan.
[image via screengrab]