Allison Williams, This Week The Biggest Star In Her Family (Sorry, BriWi) 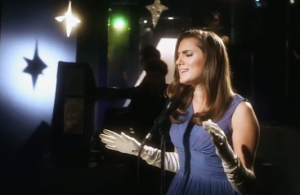 Williams — the Younger, or…dare we call her…AlliWi? — absolutely dazzles in the video, a single-take orchestral mashup of the RJD2 song, “A Beautiful Mine” that has now become iconic for playing over Mad Men’s opening credits, with Nat King Cole’s “Nature Boy.” According to the accompanying copy on YouTube (on the brand-new VideoRecordedLive channel — expect great things) it was the 29th take, with “no cuts, dubbing, lip-syncing or auto-tuning…[j]ust a bunch of film/music nerds getting together to do something ambitious.” Clearly they succeeded. Watch it below, followed by some other of her million-view YouTube hits:

Those of you who have followed my enthusiasm for homegrown musical mash-up videos by college students will no doubt recall my fave video from early January, “Simple, Fabulous Acoustic Lady Gaga Medley By Two College Kids Kills On YouTube.” The two college kids in question were Sam Tsui and Kurt Hugo Schneider, and they not only killed as Lady G but they had a whole cadre of talented friends with whom they performed…one of whom was…AlliWi!