Alternate History: What Would Have Happened If Jonnie Marbles’ Pie Had Actually Hit Rupert Murdoch’s Face 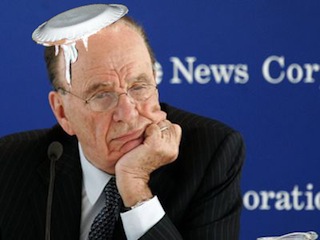 Yesterday, the testimony of Rupert and James Murdoch was briefly interrupted when a man attempted (and failed) to throw a shaving cream “pie” into the elder mogul’s face. Many have described the attempted pieing assault harshly, calling it “stupid,” “pointless,” and “a waste of time” (these aren’t direct quotes of anyone in particular, I’m just making an educated guess that someone somewhere said those things) while the perpetrator himself, a comedian and activist named Jonnie Marbles, has written an explanation in The Guardian in which he says he “did it for all the people who couldn’t”. That’s a nice sentiment, but many people (again, educated guess) are wondering just what exactly he thought was going to happen. Well, Mediaite is proud to bring you a glimpse into an alternate world where Jonnie Marbles had indeed pied Rupert Murdoch.

We were able to ascertain this information by travelling through a dimensional rift that we found a few weeks ago in the handicapped stall in Mediaite’s men’s room. It allows us to enter and observe alternate realities that are very similar to ours except for a few key details. So far, we’d only been using the portal to watch seasons four through six of Arrested Development (for the curious, four and six are a little disappointing but five is freaking hilarious!) but, this time, we decided to employ it for a loftier goal.

When we entered the dimension where the pie had met its intended target, the first thing we noticed was that none of the TVs in our office were tuned to Fox News, a rarity back home. I asked Parallel Jon (who looks just like me except for a goatee which, in my opinion, he can’t pull off) the reason behind this and he handed me a copy of the Wall Street Journal, apparently its last ever printed edition. The front page contained a giant headline, “RUPERT MURDOCH CLOSES NEWS CORP. AFTER GETTING PIE ON FACE”.

Reading the article was interesting. It quoted Parallel Murdoch thusly:

“When I was sitting there being interrogated and accused of malfeasance by the British Parliamentary, I really wasn’t paying attention. I mean, who cares what some stuffy suits have to say? But, when I got shaving cream on my face, that’s when I really learned my lesson.”

The article went on to quote Parallel Murdoch as explaining that he and his son would be turning themselves into British authorities and that, while he was away, all of his assets would be handed over to UNICEF. Sure enough, when we turned the television to the channel that used to be Fox News, it was now a telethon to end world hunger. From what we gathered watching it, the sizable Fox News audience had contributed enough money in one day to feed three out of seven continents.

We flipped through more channels and eventually came to BBC World News which was reporting on Parallel Marbles’ political ascent. It turned out that all of those people he mentioned in our world’s Guardian, the ones who wanted to pie Rupert Murdoch but couldn’t, actually exist and are a powerful political block. In just one day, they had had Marbles declared Prime Minister as well as Sexiest Man Alive and Totally Awesome Comedian. The BBC was interviewing one of them as we watched.

“Jonnie knew just what to do. Clearly, the best way to get back at Murdoch for everything his company did was to interrupt that stupid hearing by those powerful people who could bring down his entire empire and throw shaving foam at him. It’s so obvious! It was kind of like Martin Luther nailing his Theses to the church door. But, y’know, with shaving foam.”

This was all a little too much for us. We had to turn off the television and get some fresh air. However, when we got outside, we bumped into a person with entirely green skin. It turned out it wasn’t a person at all but rather an alien from the planet Brazon 5. His name was Zorgolax and he explained to us what he and his fellow aliens were doing on earth:

“We Brazonites have been watch this planet for many years, hoping to come down here and welcome you humans to the intergalactic community. However, we did not yet think you were ready. Yesterday though, when we saw that old man get a pie on him on TV, we realized it was finally time. Now we’re here to teach humans space travel, cure all diseases, and bring you on exciting space adventures with rad lasers and stuff.”

At this point, the group of us joined Zorgolax to travel the universe a bit (his lasers are indeed rad) and then finally returned, tired and happy, back through the portal and into our own dimension.

So what did we learn? Well, clearly, the world would be much, much different if Jonnie Marbles had been able to see his symbolic gesture through. What may have seemed silly to some of us was actually an absolutely noble move by a man who should be revered. Jonnie Marbles needs to be considered a hero and not at all a moron who forced himself into one of the most important stories in the world and wasted everyone’s time.