Andrew Breitbart And The Philosophy Of Brazen Inclusivity 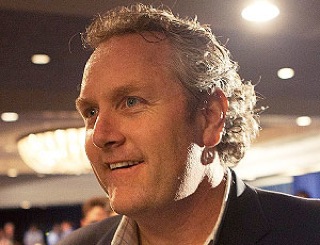 Andrew Breitbart meant a lot to a lot of different people; an American original, he too was large and contained multitudes. You will hear today from many who knew him as a friend, who adored him as an icon, from a community he built of genuine tolerance and a community of enemies comprised half of names that should make one envious of such foes and half of incomprehensibly constructed rivalries. You will hear that Breitbart was a blast no matter what his mood; that he was, in some ways, the Klaus Kinski of the conservative right— a brilliant, uncontrolled, bullish genius who gave all to this world so quickly his heart just ran out of beats.

As with many famous people, there will be an impulse to question why so many come out in praise of the man, how it is possible that so many have personal stories. It is not the product of myriad disingenuous attention-seekers looking for headlines—it is as hard to believe as it is true that he did reach them all. As a man whose core ideology was simple and brazen inclusivity and fire and brimstone to the elites, he personally strove to be as inclusive of as many people he could touch with his craft.

Breitbart was the first person of reasonable fame who I wrote about that reached out to me personally. I was an intern when I first encountered him, a month into the job at Mediaite, in early March 2010. I had written a column on his profile in Salon. He found it, and his first instinct was to find me on Twitter, and give me a call. “What did you think of the profile?” he asked, later asking about myself– why was I a conservative, how did I figure it out? He spent a good half hour on the phone, getting to know me as a member of his side of the team. I was an intern, shocked that anyone at his stature would care about someone at mine, and yet he did precisely because his ideology required it. He took his philosophy as a challenge to live by, and I’m sure I was not the only one with visible right-wing tendencies that he called, personally, and said “use me as a resource, when you need help.”

Breitbart understood the left like no one I’ve met who hasn’t lived under communism. He knew the threat in a way that most Americans cannot fathom, because life in such a thoroughly free society can never prepare your mind to flex to where it must be to comprehend the sort of oppression the radical left proposes. He got it, the way we exiles get it, almost injuriously so. He was a culture warrior, not a politician– he fought for tolerance always, for acceptance of every color and creed and sexual orientation into the conservative movement. In that way, he was an original, and a conundrum for those on the left who were so used to branding their political foes “bigots” and could use no such weapons against Breitbart. Breitbart explained to me in an interview once, as he explained to so many, that his inclusiveness was a product of his upbringing. How could genetics mean anything to me, he often said, when I was adopted, my sister was adopted, I share blood with no one I love? His ideology was infinitely inclusive, and for this it will be remembered as a faulty one, as he often took the blame for some of the more negatively off-beat things those he allowed to write on his website or those with whom he allied came out and said. The left will try to brand those things, too many attacks to name now, as proof that he was the classic right-wing bigot; the reality is, he despised bigotry in all its forms—and particularly bigotry as classist elitism— above all things. His only displays of intolerance were against intolerance, whether that intolerance be of race, class, sexual orientation, education level, experience, intelligence, or all of the above.

There are very few people in history like Andrew Breitbart, who work 25 hours a day to fight against something they only know in theory, to raise an army of conservatives who before him had no idea what they were up against. His best qualities were also his faults, and while it is impertinent to recall today, to move his legacy forward also demands an eye for how far that passion can take us and how blinding it sometimes was, even for him, to see the political light. He became an icon not because of those faults— not because he saw each and every one as an enemy when he was at war— but because that very same passion and attention to the detail of humanity led him to be a friend, to reach out, not to cower behind publicists or self-image when it came time to stand up for what he believed in. I experienced only a taste of both, and can attest that they were equally formidable and without peer.

Many will judge him by how far that passion brought him, by how many human errors he made on his quest for cultural justice for conservatives. For me, I will remember him best by following and watching his allies, employees, fans, and larger community on Twitter, Breitbart’s forum of choice. Their tributes to the man who brought many of them into social consciousness are touching, and their unity in both attack and support is a reflection of who Breitbart was as a man as well as a pundit, and their clarity in their tributes of their mission and how to keep his legacy alive speak to the effectiveness of his work.

Many will say that Breitbart was gone too soon—for his children and his wife, his family and loved ones, this is absolutely true. But for the political world, for those who followed his exhausting work day by day in anticipation of what his rabid brand of genius would come up with next, we could not have asked for more from his life.