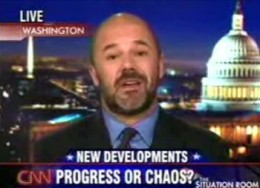 First of all, it is a measure of how the mainstream media still views the online world that the NYT piece about Andrew Sullivan’s plea for Atlantic print subscribers is titled “A Blogger Makes a Pitch for Supporting Print’ [emphasis ours]. I mean honestly! Considering Andrew Sullivan is on some Sunday morning talk show practically every weekend and averages 160,000 visits a day, he’s probably infiltrated the mainstream enough that by not using his name in the hed the Times has just depleted the SEO value of their article. Anyway!

What the Times story is actually about is that last week Sullivan apparently asked (pleaded with?) his readers to subscribe to the print version of The Atlantic and within two days the “appeal pulled in 75 percent of the subscriptions that the Web site draws in a typical month.” Wow! Andrew Sullivan is the new Barack Obama of the print world. Now doesn’t every magazine wish they’d seen the writing on the wall and invested in an Andrew Sullivan five years ago?

The larger point here is that the power of individuals, and individual branding — an anathema to traditional journalism, which is all about the larger brand — may be the future of print. Imagine if every powerful media figure/blogger reached out and asked his or her personal audience to subscribe to one print publication. I have no doubt many would comply. Maybe someone should designate a weekend for it and turn it into the online version of NPR or PBS’s pledge drive! Seeing as Obama has said he’s open to considering whether newspapers should be given non-profit status, this might just be the next step — a blogger supported print industry. And then perhaps with every print subscription you’ll be allowed access behind whatever paid-content firewall your favorite blogger has put up.