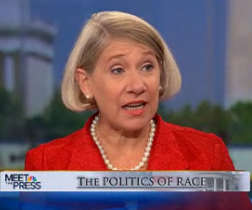 A short, interesting exchange on Meet the Press today that I think goes a long way in explaining how the administration found itself playing a starring role in the Shirley Sherrod fiasco this week. Listen to how former White House communications director Anita Dunn, former White House communications director and the person who last fall was charged with “leading the Administration’s effort to block officials, including Obama, from appearing on the network,” explain how the administration got into this mess. Here is her exchange with the New York Times’ David Brooks:

MR. BROOKS: So we were trained in a certain way. A different sort of media, squabble culture, has come up on the left and the right, which, which decides their–they build audience by destroying other people. They don’t know anything about policy, they don’t care about government, they just want that squabble.

MR. BROOKS: And my rule is–I mean, for somebody, what Anita was doing…stay away from the squabble culture. Don’t get in there. And that’s true for us, and I would say that’s true…

MS. DUNN: And you have a false, a false fact, an edited speech, as, as E.J. says, that was designed to create this outcome that becomes “the news of the day,” OK?

MR. BROOKS: Well, then play by different rules. Maybe before firing somebody, call them up and talk to them.

Emphasis mine, because when the White House Press Sec. walks into a room what exactly does he expect to be asked? If this is the mind set the White House has constructed for itself regarding the press not only does this whole week make more sense — they apparently felt having a definitive answer to the reaction question was more important than whether their answer was right — it means they have actually bought into the cable culture. And that is perhaps as or more worrisome than anything else that has happened this week, because you cannot run a country based on a highspeed, attention-deficit, traffic-oriented, newscycle. We are apparently learning this the hard way. A side note: it’s frustrating to see David Gregory keep trying to cut away here. Watch below.