Ann Coulter: MSNBC Won’t ‘Put on Conservatives Who Can Put Two Sentences Together’ 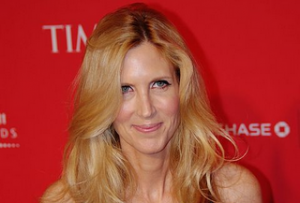 [This article has been updated since its first posting. Please see correction at bottom.]

Ann Coulter had some tough words for an MSNBC host yesterday, and today she took a shot at the network for not necessarily having the most articulate conservatives on the show in the past few years.

Coulter was speaking with Newsmax’s Steve Malzberg about her challenge to Ed Schultz to bring her on his show and debate him. Malzberg wanted to bring up the time he faced off with Schultz on Fox & Friends, many years ago, but Coulter jumped in to say of Schultz’s home base: “They will not put on conservatives who can put two sentences together.”

Malzberg noted that when he faced off with Schultz on Fox, Schultz actually stormed off in the middle of the interview. And so when Schultz said yesterday that Republicans don’t want to talk to him, Malzberg said, “when they do talk to him, he runs away!”

Coulter said that MSNBC’s gotten “crazier and crazier in their conspiracy theories,” calling out Rachel Maddow in particular and wishing that just once, they would have on a conservative who could tell them to their faces, “You people are out of your minds!”

Watch the video below, via NewsmaxTV:

[Correction: This post has been updated to reflect that Coulter was referring to MSNBC, and not Fox & Friends. Only Malzberg mentioned the Fox morning show. Coulter, on the other hand, strictly discussed MSNBC hosts and contributors Ed Schultz, Rachel Maddow, Meghan McCain, and Todd Harris.]