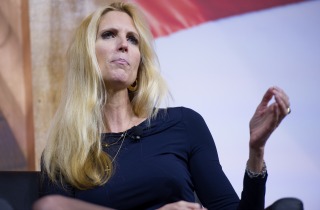 In her syndicated column this week, conservative commentator Ann Coulter blasted the U.S. government’s response to the current Ebola outbreak in West Africa and the few cases in the United States.

She criticized CDC director Dr. Tom Frieden‘s reasoning for not stopping flights to and from affected nations in West Africa, and compared the government’s current position with its actions over the summer when the FAA issued a travel ban to Israel during the height of the latest conflict in Gaza.

“What is it with liberals living in gated communities always telling us that fences don’t work?” Coulter wrote. “THAT’S WHAT A QUARANTINE IS.”

Echoing recent sentiments expressed by Donald Trump, Coulter questioned President Obama’s decision to send 4,000 U.S. troops to the affected region to help combat the virus and insisted the general leading the troops “should resign in protest.”

In addition, she expressed anger at the fact that Ebola patients are essentially receiving free medical care in America (emphasis added):

At the moment, more than 13,000 West Africans have travel visas to come to the U.S. Having just seen an Ebola-infected Liberian get $500,000 worth of free medical treatment in the U.S., the first thing any African who might have Ebola should do is get himself to America.

Of all the reasons people have for coming here — welfare, drug-dealing, Medicare scams — “I have Ebola and I’m going to die, otherwise” is surely one of the strongest. The entire continent of Africa now knows that this is a country that will happily spend half a million dollars on treating someone who just arrived — and then berate itself for not doing enough.

Thomas Eric Duncan’s family may be upset with his treatment, but they have to admit, the price was right. Medical bill: $0.00. Your next statement will arrive in 30 days.

And now we’re going to have to let in entire families with Ebola, because the important thing is — actually, I don’t know why. It’s some technical, scientific point about fences not working.

Republicans — Americans — have got to demand Frieden’s resignation. If only we could demand Obama’s.