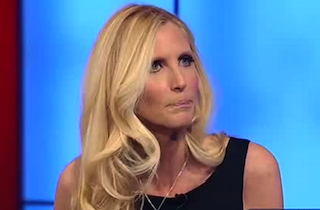 ICYMI: Ann Coulter is a huge fan of Donald Trump and his surge in the Republican primary polls. So much so that she appears to be angling for a position in his inevitable cabinet.

Speaking at the Eagle Forum’s Collegian Summit last week in Washington, D.C., Coulter declared that, if he sticks out the rest of the race, Trump is “more likely to be the next president than Jeb Bush or Marco Rubio.” If Ross Perot could swing 20% of the vote in 1992, she added, then the billionaire real estate mogul could surely put a larger percentage of the vote in the digital media era.

Later on, Coulter said, “I would like to be the head of Donald Trump’s Homeland Security.” And she was only “half-kidding,” because “I don’t think it’s that hard to figure out.”

“I’ll get it all done before breakfast,” Coulter continued. “[I] could kind of guess who the criminals are going to be at least 50 percent of the time.”

Part of the Coulter platform for securing the homeland, she suggested, would include a return to the olden days where incoming migrants had to “prove” their “heartiness” to the United States.

“There was no pussyfooting around,” she said. “We’re assimilating you, you’re here and you’re going to be an American. There will be no celebration of Cinco de Mayo, there will be no Ramadan, in fact there won’t even be a Feast of the Immaculate Conception –- we are an Anglo-Protestant country, and you will learn about the Battle of Valley Forge.”

Looks like we’ll have to update this post with an entry for Coulter as the secretary of DHS.

Listen to the audio below, as clipped by Right Wing Watch: