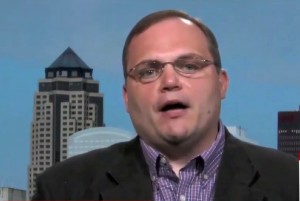 Steve Deace, the conservative #NeverTrump stalwart and erstwhile Ted Cruz campaign surrogate, appeared on MSNBC Monday to challenge Donald Trump to prove that he’s a “badass” and open up the Republican National Convention.

As a number of reports this week have indicated, “Never Trump” has pivoted to “Dump Trump,” an effort by some Republicans to deny Trump the nomination at the RNC in July by targeting delegates and pressing them to change their vote, and Deace is a party to that effort.

Trump did not “have the intellectual capacity, the brains, the quick wit, nor the courage of conviction to really talk about issues,” Deace said. “So he has to revert to name calling.”

Asked if there was anything Trump could possibly do to persuade or win over the “Dump Trump” conservatives, Deace replied: “I think Donald Trump ought to show us his alpha male. He ought to show us he really is the badass that he claims. Why don’t he just go ahead — he de facto controls the RNC now, Peter — why doesn’t he just go ahead and say, ‘You know what, we’re going to go ahead and unbound those delegates. I’m going to go for the ultimate sale close, the biggest reality TV show stage on the planet with every camera in the world watching.'”

If Trump could demonstrate an ability to win the majority of Republican delegates at the convention, Deace argued it would be difficult for him to prove that he could win the general election. “Let’s have it out in Cleveland,” he said. “A real fight.”

Deace has been one of Trump’s most outspoken conservative critics. He once argued that his fans were members of a cult who acted like “crack addicts.”