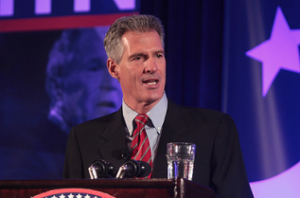 No, you didn’t step into a time machine and come back out in the year 2012. Scott Brown is really still talking smack about the woman who nabbed his senatorial seat in the state of Massachusetts, Elizabeth Warren. He’s already gotten negative publicity for his staffers’ behavior regarding her claims to be partially Native American, but four years after being ousted from his job, he’s still at it.

Brown has been pulling for Donald Trump lately and there are even rumors that he could be a potential Vice President pick, which Warren has laughed at already. Today, he called for her to take a DNA test and release the results, according to the Huffington Post‘s senior politics editor, Sam Stein.

The Washington Examiner backed him up, reporting that he did call for the DNA test and for her to have her former employers release her records to the public.

Response to the suggestion from Brown, who ran and lost in New Hampshire after being defeated by Warren, have not been entirely kind.

@samsteinhp As long as he agrees to take an IQ test.

@samsteinhp I challenge Scott Brown to choose a state he calls home.

@samsteinhp And Warren should challenge same to prove Brown’s not really Malibu Ken.

@samsteinhp Who is Scott Brown?

There has been no response from Warren yet.