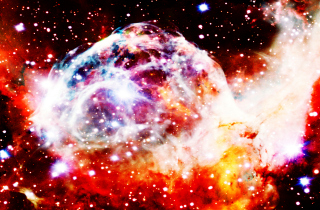 A new poll from the Associated Press has shed light on Americans’ beliefs about a series of “settled scientific facts”, including our grasp of the Big Bang, climate change, and the effects of vaccines. The results are somewhat surprising, unless you happen to have answered “yes” in any recent polls that asked “Are Americans generally stupid?”, in which case you can probably go ahead and skip this one.

The survey asked 1,000 people to rate their confidence in the veracity of statements about science. For things that are immediately observable, or have an every day effect on their lives, opinions tended to side with science. For bigger picture, harder-to-grasp concepts — such as the creation of the universe, which, to be fair, is kind of a stupefying scenario to fathom — they tended to express skepticism.

About 4 in 10 say they are not too confident or outright disbelieve that the earth is warming, mostly a result of man-made heat-trapping gases, that the Earth is 4.5 billion years old or that life on Earth evolved through a process of natural selection, though most were at least somewhat confident in each of those concepts. But a narrow majority — 51 percent — questions the Big Bang theory.

In a completely unrelated study from a couple of years ago, Gallup determined that 3 in 10 Americans believe the Bible is literally true, and almost 50% think it is the inspired word of God. Weird how that sort of lines up.

Even more troubling, elsewhere in the AP study, 15% expressed doubt about the safety and efficacy of childhood vaccines, which means that 1.5 in 10 Americans believe in the inspired word of Jenny McCarthy. Not sure which is worse.

To the public “most often values and beliefs trump science” when they conflict, said Alan Leshner, chief executive of the world’s largest scientific society, the American Association for the Advancement of Science.

“When you are putting up facts against faith, facts can’t argue against faith,” said 2012 Nobel Prize winning biochemistry professor Robert Lefkowitz of Duke University. “It makes sense now that science would have made no headway because faith is untestable.”

Democrats were more likely than Republicans to believe in evolution, the age of the Earth, climate change, and the Big Bang, they found. Those who regularly attend church were more skeptical, which is weird because skepticism isn’t exactly a cornerstone of people of faith.