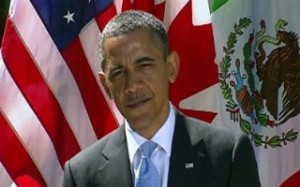 President Obama has been facing some backlash since his comments yesterday, in which he said he was confident that “an unelected group of people” would not make the unprecedented decision to overturn his health care law. On Tuesday, a federal appeals court challenged the Justice Department, asking whether the Obama administration believes the courts have the power to strike down federal law.

According to a CBS News report, “the panel ordered the Justice Department to submit a three-page, single-spaced letter by noon Thursday addressing whether the Executive Branch believes courts have such power.” The move comes from a three-judge panel of the U.S. Court of Appeals for the 5th Circuit. The issue arose “when a lawyer for the Justice Department began arguing before the judges.” From CBS News:

Appeals Court Judge Jerry Smith immediately interrupted, asking if DOJ agreed that the judiciary could strike down an unconstitutional law.

The DOJ lawyer, Dana Lydia Kaersvang, answered yes — and mentioned Marbury v. Madison, the landmark case that firmly established the principle of judicial review more than 200 years ago, according to the lawyer in the courtroom.

Smith then became “very stern,” the source said, telling the lawyers arguing the case it was not clear to “many of us” whether the president believes such a right exists. The other two judges on the panel, Emilio Garza and Leslie Southwick–both Republican appointees–remained silent, the source said.

Smith “went on to say that comments from the president and others in the Executive Branch indicate they believe judges don’t have the power to review laws and strike those that are unconstitutional.”