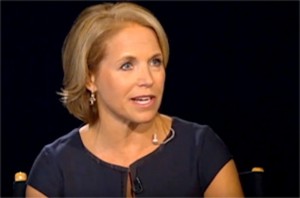 We all remember our first crush…

As a child who became a curious teenager as the 80s became the 90s, mine were these in this order:

Guess there’s a theme there around good girls with great smiles that are more the marrying than Playboy-posing-type, huh? But this piece of nostalgia is being shared because of the last name on that list. Katie Couric was probably on a few million similar lists when she rose to stardom via NBC’s Today in the early 90s. Like Ryan, she was America’s Sweetheart: smart, charming, flirty, impossibly cute. The perfect morning show host and arguably the best ever in that position. NBC certainly felt that way, signing her to an unheard-of-at-the-time with a 4-year, $28 million dollar contract in 1998… which was followed four years later for the 4-year same term, but at $65 million.

In 2006, she became the first solo female anchor in network history when moving to CBS, winning two Murrow awards in 2008 and 2009. Of course, 2008 included a ridiculous “controversy” over one of the more benign questions an anchor has ever asked a vice presidential candidate (“What newspapers do you read?”) when Couric was doing a piece on Sarah Palin (Verdict: the question was impossibly fair and Couric got heat from a nervous conservative media for no reason).

She wrote three New York Times best-sellers along the way. She was at the top of the social A-list not just in the broadcast news business, but as a celebrity in the same Tom Hanks–Meryl Streep stratosphere. Storybook stuff…

But after leaving CBS (due to Evening News ratings struggles), Couric completed the Big-3 triad by joining ABC in 2011. That tenure was hardly memorable as Couric simply couldn’t establish herself among a sea of (younger) talent. Her gravitas in the industry was still there but her overall relevance fading. Enter Yahoo News, which made her the face of its growing online news division two years ago.

If that reads like a career obituary, it’s because it may very well be. Couric, who turns 60 next year, may now be staring at the end of her career, and not exactly the kind of ending that another icon in Peyton Manning just enjoyed (See: going out as a winner on the world’s biggest stage). Why? Because the news that broke this week around the deceptive edit to end all deceptive edits is not the kind of thing that one at this stage of her career (See: on the downside) can ever recover from if credibility means anything anymore.

Quick summary: Couric signs on as an executive producer, host and narrator of a documentary titled Under the Gun. The doc is produced and directed by Stephanie Soechtig, an anti-gun activist. And at what’s supposed to be a telling moment of the movie, Couric asks a group of Virginia gun owners the following question: “If there are no background checks for gun purchasers, how do you prevent felons or terrorists from purchasing a gun?”

This is what Soechtig and Couric try to sell as the stunned/speechless reaction:

But since we live in a world where (A) The media isn’t trusted and (B) It’s easy to record anyone, anywhere, anytime, the interview was recorded (audio) by one of the gun owners being interviewed. The tape — obtained by the Washington Free Beacon‘s Stephen Gutowski — proves the aforementioned stunned/speechless reaction to Couric’s question was anything but. Audio here:

So instead of ten seconds of said gun owners searching to an answer to Couric’s devastating question, there’s an instant answer. And since we also live in a world where seemingly nobody knows how to apologize — even after getting caught red-handed — here’s Soechtig conducting a class in tripling down with absolutely no leg to stand on:

There are a wide range of views expressed in the film. My intention was to provide a pause for the viewer to have a moment to consider this important question before presenting the facts on Americans’ opinions on background checks. I never intended to make anyone look bad and I apologize if anyone felt that way.

Felt that way? Oh Stephanie, intentionally and dishonestly making people you disagree with look like idiots was exactly your intention. And every person made to appear stupid should sue you for fraud, character defamation and whatever else a decent lawyer can offer up here. But it’s Couric’s reaction that is as impossibly tone-deaf as it is apathetically generic that really deserves attention:

COURIC: I support Stephanie’s statement and am very proud of the film.

Yup. That’s it. And there’s been no statement out of Katie since. Perhaps because the backlash isn’t as harsh as it should be and therefore isn’t prompting her into apologizing or even promising to have the deceptive edit wiped out of the final cut. And remember, this is a seasoned, accomplished, adored, even historic member of the journalism community who sees no problem with greatly altering audio to drive home a narrative. Couric is royalty in the business. She’s made plenty of friends along the way. Let’s see if this continues to buy her protection via ommission from those in the media who can’t seem to get around to covering this story, which happens to have gun advocates at the center of it. Here’s betting it will…

Either way, what Soechtig and Couric are engaging in is known as journalistic malfeasance. And anyone who commits it should be put on mandatory vacation, at the very least, and outright terminated if the error isn’t acknowledged or apologized for.

This whole real-life scenario is so reminiscent of this scene from 1999’s The Insider . It’s an exchange between the late Mike Wallace (Christopher Plummer) and his producer Lowell Bergman (Al Pacino) about the correspondent’s fear of his legacy potential being destroyed over one decision to shelve an interview of a tobacco whistle-blower over corporate fears of a multi-billion dollar lawsuit that could bring cripple CBS.

Mike Wallace: In the real world, when you get to where I am, there are other considerations.

Lowell Bergman: Like what? Corporate responsibility? What, are we talking celebrity here?

Mike Wallace: I’m not talking celebrity, vanity, CBS. I’m talking about when you’re nearer the end of your life than the beginning. Now, what do you think you think about then? The future? In the future I’m going to do this? Become that? What future? No. What you think is “How will I be regarded in the end?” After I’m gone. Now, along the way I suppose I made some minor impact. I did Iran-Gate and the Ayatollah, Malcolm X, Martin Luther King, Saddam, Sadat, etcetera, etcetera. I showed them thieves in suits. I’ve spent a lifetime building all that. But history only remembers most what you did last.

Katie Couric — everyone’s former crush — the woman who broke glass ceilings along the way and has more awards than her shelves can handle and more millions than she could ever spend — is seriously damaging one of the great legacies in the business.

The evidence of deception is overwhelmingly clear. The reaction from Couric and her producer stunningly stuck on stupid. The latter could learn a few things of studying what happened to the man she basically replaced at CBS in Dan Rather, another legend sent out into the wilderness of relative obscurity after standing by a debunked story.

If no apology comes, if no changes made to the finished product… the next step is obvious. America’s one-time Sweetheart needs to be retired. As for how she’ll be regarded in the end is for history to decide.

But as Plummer’s Mike Wallace said, history only remembers what you did last.