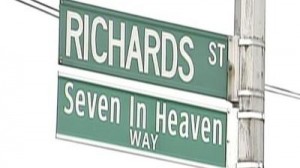 A New York-based atheist group, the creatively monikered NYC Atheists, has taken its protest of a street sign honoring fallen 9/11 firefighters to the next level by threatening a lawsuit. “Seven in Heaven Way” in Red Hook, Brooklyn, is named for the seven members of Ladder Co. 101/Engine Co. 202 who died responding to the terrorist attacks of 9/11, and while the atheists’ protest has spurred justified outrage, the atheists’ argument that heaven is a “religious concept” that is ““specifically Christian” is fatally flawed.

Back in my stand-up comedy days, I did a character named Testicles, The Ancient Greek Comic (What’s the difference between Aphrodite and Medusa? When you look at Aphrodite, only part of you turns to stone. *rimshot*), and part of the bit was the character’s apoplectic reaction at the condescension of modern-day people asking him about Greek mythology. “I call it ‘church,’ jackass!”

From an atheist’s point of view, the “Christian concept” of heaven similarly constitutes mythology, which ironically seems to vindicate the “Seven in Heaven” sign of violating the separation of church and state. Surely, they don’t plan on suing the town of Valhalla, NY, or Jupiter, Florida over their promotion of ancient “religion.”

While defending the sign on the basis that Christianity is a myth might seem offensive to some, the term “mythology” isn’t necessarily a negative one. Many Christians subscribe to the view that some portions of the Bible are not meant to be taken literally, such as the creation of the Earth in six days. In the way that these stories attempt to explain the incomprehensible through simplified metaphor, they qualify as mythology.

The mythology argument also works on another level. The dictionary defines a myth as “a traditional or legendary story, usually concerning some being or hero or event, with or without a determinable basis of fact or a natural explanation.”

Therefore, the fact that, in the telling and retelling of their exploits, these firefighters have become known as the “Seven in Heaven” creates a basis for the name in American folklore, independent of religion.

“Friendly Atheist” Hemant Mehta tried to buffer the bitter pill of his heaven-hating fellows, but the rigidity of his own belief system eventually got in the way. After criticizing the tone-deafness of the atheist leaders spearheading this protest, he hit a sour note of his own:

Let’s get the truth out of the way because it’s uncomfortable for most people: To say they’re getting an eternal reward for what they did is a lie. They died and they got no reward for their sacrifice.

Such a declaration is as without factual basis as the most zealous profession of religious faith. Setting aside the religious and spiritual underpinnings of this idea for a moment. Even in the absence of a religious belief in immortality, it is possible to achieve a kind of secular immortality.

Whether there’s a heaven, or some kind of spirit world, I have always believed that the surest way to keep someone alive is to remember them, speak about them, and feel about them. The reverence and gratitude that these seven firefighters inspire is a (hopefully) eternal reward. The space that they occupy in our hearts and minds is a heaven, metaphoric, yet tangible. No one knows what happens to the human consciousness at death, and while there’s no proof that these seven men have any idea how we all feel about them, there is, as yet, no courtroom, and no judge, with the jurisdiction to rule that they don’t.