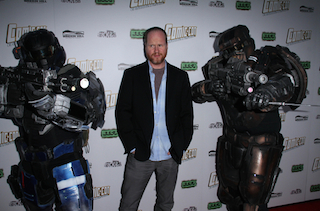 Avengers director Joss Whedon unceremoniously deleted his Twitter account Monday, leading some to believe he had been chased off by Twitterati angry over his studio’s handling of Scarlet Johansson’s Black Widow character.

On Wednesday Whedon told BuzzFeed that was “horseshit.”
Per BF:

“I saw a lot of people say, ‘Well, the social justice warriors destroyed one of their own!’ It’s like, Nope. That didn’t happen,” he continued. “I saw someone tweet it’s because Feminist Frequency pissed on Avengers 2, which for all I know they may have. But literally the second person to write me to ask if I was OK when I dropped out was [Feminist Frequency founder] Anita [Sarkeesian].”

The Avengers rollout has had its bumps, with Robert Downey Jr. walking out of an interview and Chris Evans and Jeremy Renner apologizing (and then reneging on that apology) for calling the Black Widow character a “slut.”

Whedon said he bolted from Twitter to find some “quiet space” to write, comparing working out new ideas amidst the scrum of social media to “taking the bar exam at Coachella.”

He defended his feminist bona fides but did indicate that the online discourse had wearied him. “There was a point during the whole Jurassic World thing where someone wrote the phrase ‘championing women marginalizes them,’ and I was like, OK! We’re done! The snake hath et its tail,” he said. “There’s no way to find any coherence when everything has to be parsed and decried.”