Axelrod: A GOP Congress Could Be More ‘Extreme’ Than Bush Administration

Axelrod: A GOP Congress Could Be More ‘Extreme’ Than Bush Administration 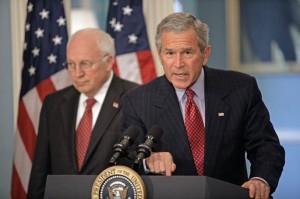 The 2010 Midterms are in exactly eight weeks. Considering the tone of the current national political conversation one shudders to think of the sort of headlines we may find ourselves posting eight weeks from now. In the meantime, behold David Axelrod who is launching the ‘official’ midterm season by declaring that a GOP Congress will be more extreme than the Bush administration. Here’s what he told Sam Stein at HuffPo:

“I saw that [Alaska GOP Senate candidate] Joe Miller said that he would abolish Social Security if he had the chance and he is not alone…This is akin to what [Nevada GOP Senate candidate] Sharron Angle has said in Nevada and also a number of these other Republicans. So, this could go one step beyond the policies of the Bush administration to something more extreme than we have seen.”

Presumably, this is a scare tactic on Axelrod’s part to gin up Dem support. However, factually accurate though it may be (and I will leave that for others to hash out) it strikes as a tad tone deaf. In recent weeks, particularly since the ‘Ground Zero Mosque’ furor leapt to the fore, George W. Bush has been used by many in the press as an example of both a moderate Republican (also, a quiet one…Bush has opted for the high and silent road, something that is increasingly rare at the moment) and more recently as a president unafraid to be decisive.

The fact that it has taken less than two years for the rehabilitation of George W. Bush to begin may be striking in and of itself but if Axelrod et al hopes to effectively use him as a scare monger I think perhaps they have not fanned the right Facebook pages because rightly or wrongly George W. is not looking all that bad these days.