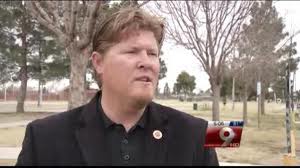 Arizona seems to make headlines for some interesting reasons — whether it’s a law trying to tackle lewd language online, or a legislator proposing “Caucasian Day,” or Gov. Jan Brewer‘s finger-pointing confrontation with President Obama. The most recent installment involves state Rep. Daniel Patterson (D), whose colleagues are accusing him of some very violent behavior. One fellow lawmaker even said she sleeps with a weapon at her bedside. You know, just in case.

RELATED: That Last Internet Comment You Just Wrote Would Probably Be Illegal Under New Arizona Bill

Over at Talking Points Memo, Nick R. Martin reports on Patterson, who is undergoing an ethics investigation. The lawmakers who say they fear him “said they are now considering throwing Patterson out of office after an ethics investigation uncovered a series of similar outbursts, along with other allegations, including that he once offered to give a lobbyist his vote in exchange for sex and that he regularly smokes marijuana.” According to The Arizona Republic, Patterson will keep his House seat for another week or so.

Charges of four misdemeanor counts of domestic violence — which “stemmed from fights with his live-in girlfriend, who also happened to be his campaign manager at the time” — led to the investigation. It seems the incidents are not just recent though. In 2010, it came to light that his estranged wife filed a restraining order against Patterson (also claiming he’d been violent).

“If what his colleagues in the Arizona statehouse say is true,” Martin writes, Patterson “might be the most feared politician in the state.” Some details from TPM’s report:

One of Patterson’s fellow Democrats, Rep. Margaret “Lynne” Pancrazi, told investigators she had taken to referring to him as “Dr. Jekyll and Mr. Hyde” and often described him as paranoid. Since the ethics complaint was filed, she said she and other lawmakers have been afraid to be around him.

“I have made a habit of keeping a weapon near me when I sleep,” Pancrazi wrote in a signed declaration that was included in the report. “I fear for my safety at the Capitol and have requested additional security.”

The ethics investigation also said Patterson had a history of being threatening and combative with his fellow lawmakers, cursing at them during committee hearings and yelling at them in the hallways of the state Capitol.

For his part, Patterson insists he’s innocent, calling the investigation a “jihad” against him. Taking to Twitter, he said the report was filled with lies:

Manning report had pre-determined political outcome; based on lies & slams by politicians, lobbyists & lawyers, not views of my constituents

Though he has been unwilling to apologize, Patterson also wrote on Twitter that he’s suspending his re-election campaign and “likely will not run for AZ House in 2012.” He wrote he wants to “focus on family” and “break from politics.” Patterson has until April 10 to respond to the allegations.

If what the report says is true, wow. But, of course, the investigation hasn’t yet concluded.