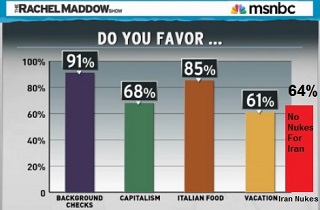 Universal background check legislation is the only one of the three measures that President Obama cited, in his announcement of the post-Newtown Biden task force on preventing gun violence, that will be included in the Senate bill that will be voted on after the Easter recess. Not long ago, Rachel Maddow illustrated the degree of public support for background checks by comparing the measure’s popularity against that of things like Italian food, capitalism, and vacation. According to two recent Pew polls, you can add “keeping Iran from obtaining nuclear weapons” to that list.

According to a Pew poll released Wednesday, 64 percent of Americans think the United States should prevent Iran from developing nuclear weapons, even of that means taking military action, versus 25% of Americans who are willing to let Iran have nukes if it means we can avoid military action.

In another Pew poll, released a week earlier, support for universal background checks was slightly lower than it has been in most other national polls:

Among all Americans, 83% supported universal background checks in that poll, yet even this most popular provision is still not considered a lock to pass the Senate, let alone the House.

There are two other things that are interesting about that second poll, though. If you take the margin of error into account, the support for an assault weapons ban is damn near tied with opposition to Iranian nukes. With a margin of error of three points, 56% of Americans supported an assault weapons ban in the Pew poll, yet that measure is still seen as impossible to pass. In a world where 90% only gets you a maybe, that might not be surprising, but it isn’t right, either.

Public support alone is not, of course, a reason to pass a law; if it were, our national anthem would probably be the theme song from Wheel of Fortune. But massive public support does remove an excuse for blocking an otherwise-worthy law. Background checks, assault weapons bans, magazine limits, and even a national gun registry have all been judged to be constitutional by the Supreme Court, have demonstrable benefits to public safety, and respect the Court’s interpretation of the Second Amendment. No one has been able to give a single reason to allow the sale of these weapons and magazines, beyond the mistaken belief that the U.S. Constitution guarantees it.

The other interesting thing about this poll is that, despite some minuscule softening of support for certain gun regulations, the Pew respondents crossed an historic threshold with this survey. The most frustrating things about polls on gun regulations is the contradictory responses you get for specific gun control measures, versus gun control in general. In the same poll, 91% of people will say they favor universal background checks, then 45% of them will turn around and say they oppose stricter gun control measures, and you want to smack them. You also want to smack the pollsters for not asking these people the followup: “Are you a. an idiot, b. unaware of what words mean, c. under the impression that universal background checks are already the law, or d. a complete idiot?”

Having said that, there’s a question on this Pew poll that they have been asking for a little over two years, since just after the mass shooting in Tucson that Gabby Giffords survived with a gunshot wound to the head, and which claimed the life of 9 year-old Christina Taylor Green, whose life would have been saved by the assault weapons ban. That question is “What do you think is more important — to protect the right of Americans to own guns, or to control gun ownership?”

Again, the percentages on this question don’t come anywhere near matching the responses on specific gun regulations, but in January, for the first time since Pew started asking it, the percentage of people who think it’s more important to control gun ownership reached 50%. This question also makes me want to smack the pollsters, since like many gun control questions, it presents a false choice, but to the extent that it has any value, this question does demonstrate a shift, and perhaps a tipping point, in public attitudes about guns in general.