Barbara Walters Was a Playboy Bunny? Take a Look At This Old Footage! 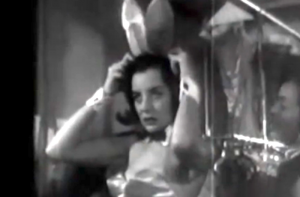 In American news broadcasting, few names inspire as much reverence as Barbara Walters. She of “Most Fascinating” fame has been in the business so long that she is the business. In fact, she is the Most Fascinating in her own right and this old footage of Walters during her days anchoring Today prove it.

During a story she was working on about the Playboy empire in 1962, the icon decided to go really deep with the investigative work and donned the equally iconic costume. At the time, Playboy had existed for nine years as a magazine, but for only two as a club. It was in the clubs that the infamous bunny costume was born and really took off.

Watch the video above to see a young Walters being fitted in the satin ensemble and asking her stylists if any of the young women who worked in the clubs were “embarrassed” by the required uniform.

“I feel ridiculous!” she said, decades before that ridiculous feeling caught up with the empire and inspired them to release non-nude magazines, which they’ve now been doing for a few months.

Lest you think her unwillingness to wear the outfit regularly makes Walters a prude or something, never forget that this is the same woman who called Bradley Cooper “screwable!”