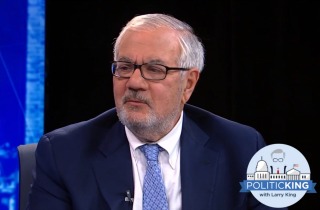 Former Representative Barney Frank (D-MA) — who, until recently, was caught in an John Updike/John Irving vortex of confusion with other Northeastern liberal Bernie Sanders (I-VT) — told his fellow liberals to ignore the appeal of the surging Democratic candidate and stick with frontrunner Hillary Clinton.

In a post for Politico, Frank said the very fact that a guy like Weekly Standard editor Bill Kristol was salivating at a Sanders surge told you everything you needed to know about how good it is for the Democratic Party.

“Republicans fear that if Hillary Clinton is nominated fairly easily, while they are locked in a bitter, lengthy, ideologically charged series of primaries with a large cast of characters of varying degrees of plausibility, she gets a head start for the real fight,” Frank wrote. “They believe boosting Sanders’ candidacy is their only way to prevent Clinton emerging as the nominee with broad support early in the process, strengthening her position in November. They are correct.”

Frank argued that despite criticisms of Clinton’s coziness with Wall Street, she was actually a longtime tribune of financial regulation, and “to the left” of then-candidate Barack Obama on social issues.

He also dismissed the theory, dominant on the left, that Clinton’s ultimate policies would benefit from progressive pressure, likening it to the process then-candidate Mitt Romney underwent in 2012, in which he was pulled to the right by a hotly-contested primary and saddled with unelectable positions:

I know that there is a counter-argument made by some on the Democratic left that a closely contested nomination process will help our ultimate nominee — that Clinton will somehow benefit from having to spend most of her time and campaign funds between now and next summer proving her ideological purity in an intraparty fight, like Mitt Romney in 2012 — rather than focusing on her differences with the conservative she will face in the election. But neither an analysis of the current political situation nor the history of presidential races supports this.

I believe strongly that the most effective thing liberals and progressives can do to advance our public policy goals — on health care, immigration, financial regulation, reducing income inequality, completing the fight against anti-LGBT discrimination, protecting women’s autonomy in choices about reproduction and other critical matters on which the Democratic and Republican candidates for president will be sharply divided — is to help Clinton win our nomination early in the year. That way, she can focus on what we know will be a tough job: combating the flood of post-Citizens United right-wing money, in an atmosphere in which public skepticism about the effectiveness of public policy is high.

While praising Sanders’ political integrity, Frank nonetheless concluded that “wishful thinking is no way to win the presidency. There is not only no chance — perhaps regrettably — for Sanders to win a national election. A long primary campaign will only erode the benefit Democrats are now poised to reap from the Republicans’ free-for-all.”