Beck: Did Obama Refuse To Meet With Tony Hayward Because He’s A “White CEO”?
moment of glenn

Beck: Did Obama Refuse To Meet With Tony Hayward Because He’s A “White CEO”? 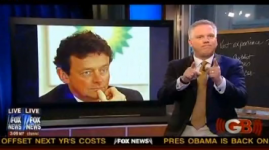 There are not a lot of people out there clamoring to defend BP CEO Tony Hayward, but Glenn Beck took a shot at it today. Sort of. In a diatribe against Obama that lasted a full twenty minutes Beck hypothesized that the President had refused to meet with Tony Hayward because the president hates capitalists or alternately because he hates white capitalists.

Beck wants to know why the ACLU is not rushing to defend BP employees the same way they did Muslim American’s after 9/11: “There’s no rush to defend a completely innocent capitalist.” As for Obama’s delayed meeting with Hayward, Beck has some, um, theories:

What is it in the President’s experience that makes him say ‘guys like this CEO.’ What is it in his vast, oil rich experience, you know, as a community organizer…just to be able to say, they’re all alike.

Obviously it’s because they’re capitalists and Obama hates capitalists. Or maybe it’s because Hayward is a “white CEO” (4 min mark). Yes. Beck’s tenuous proof that Obama wouldn’t meet with Hayward because he is a “white CEO” (as opposed to Ahmadinejad) is an old interview Obama gave back in 1995 for Dreams of My Father, (which made the rounds a few years ago) where he said this, though Beck only played the first half:

I think that whether you are a white executive living out in the suburbs, who doesn’t want to pay taxes to inner-city children for them to go to school, or you’re an inner-city child who doesn’t want to take responsibility for keeping your street safe and clean, both of those groups have to take some responsibility if we’re going to get beyond the kinds of divisions that we face right now.

Says Beck: “May I just go out on a limb for a second and say it’s almost like the President has made up his mind about this guy and anyone like him.” Suffice to say, it’s a long, long, long, long, tenuous limb. One might even suspect it’s an Overton Window. Watch below.