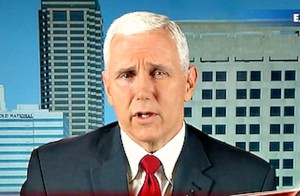 On Tuesday night Republican candidate for Vice President Mike Pence will take the stage with Sen. Tim Kaine (D-VA) for the first and only VP debate of the election cycle.

Pence was tapped by the Trump campaign in July to join the GOP ticket. He has served as the governor of Indiana since 2013. Before that he represented the Hoosier State in Congress from 2001 to 2013.

Tuesday’s debate is likely to demonstrate a major point of contrast between Pence and his tempestuous running mate. Unlike Trump, Pence has a reputation for being calm and unruffled. The onetime talk radio show host once described himself as “Rush Limbaugh on decaf.”

Since joining the ticket, he has taken a less incendiary tack than Trump and has assumed the dubious role of the “cleanup crew,” mollifying blowback from his more extreme positions or trying to reframe his impulsive remarks, such as Trump’s “Obama founded ISIS” assertion.

For instance, Pence assured voters that Trump had come around on the issue of President Obama’s birthplace (after he had been fanning conspiracy theories for years), but did so days before Trump would admit it in his own words. Pence also signaled that Trump was considering ending his blacklist of media outlets whose coverage he disagreed with.

During the primary Pence did not always see eye-to-eye with the firebrand Trump. In Dec. 2015, he criticized Trump for his proposed ban on all Muslims entering the nation, calling it “offensive and unconstitutional.”

Shortly before his state’s GOP primary vote, Pence announced (in a somewhat tepid fashion) that he was endorsing Ted Cruz, Trump’s closest challenger for the Republican nomination. As it happened, Indiana turned out to be Cruz’s last stand. He came in second to Trump, capturing 36% of the Indiana Republican vote, and he suspended his campaign shortly thereafter.

If Trump was looking to shore up his ticket’s credentials with social conservatives, Pence, a devout evangelical, was arguably his safest bet. He has called himself “a Christian, a conservative, and a Republican, in that order.”

Pence drew nationwide attention last year after he signed into law a controversial “religious freedom” bill, which some believed gave businesses latitude to discriminate — a charge Pence vociferously denied. After the bill prompted major backlash, Pence backed a bill with softened language, inviting the ire of some social conservatives who thought Pence had not held his ground.

Pence also signed into law one of the most expansive anti-abortion laws in the country. A federal judge ruled that the law was unconstitutional and blocked it before it went into effect.

Despite his opposition to ObamaCare, he expanded Medicaid in Indiana under the controversial law. “This has been a long process, but real reform takes work,” he said of the expansion last year.

Like Trump, Pence has voiced his opposition to Syrian refugee resettlement in the United States. He ordered Indiana agencies to refuse to aid in any effort to relocate refugees in the state; that order was blocked by a judge.

A Public Opinion poll from April shows that 49% of Hoosiers support Pence for re-election. Pence announced last year that he would seek the governorship again, but dropped the bid when he joined the presidential ticket.

The vice presidential debate is tonight, Tuesday, Oct. 4, at 9 p.m. eastern time. It will take place at Longwood University in Farmville, Virginia, and will be moderated by CBS’s Elaine Quijano. The debate will air on all the major broadcast networks and cable news networks, including C-SPAN, ABC, CBS, FOX, NBC, CNN, Fox News, and MSNBC, among others.

You can watch a livestream of the debate here.

Editor’s Note: This post appeared on this site in a slightly different form on July 14.