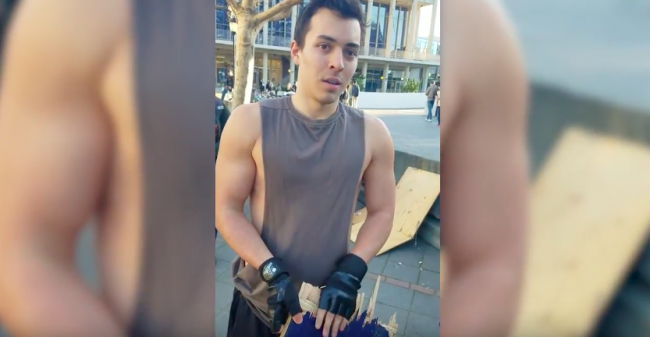 Roughly a month after the University of California, Berkeley was forced to cancel a speech by former Breitbart tech editor Milo Yiannopoulos due to violent campus rioting, a residual of disaffected students are still harassing the school’s college Republicans and committing acts of vandalism, Campus Reform reported.

Footage posted to Facebook by the Berkeley College Republicans shows a casual student hooligan ripping up wooden signs belonging to the group and disposing of them in nearby trashcans.

Despite repeated reminders and threats to call campus security, the unnamed vandal continued his destruction, stopping only to ask whether the debris he was creating should be filed in trash or compost.

“Today we had one of our signs destroyed by a student,” the group said on their Facebook page. “This kind of behavior is unacceptable and will not be tolerated. If you know who this student is, please get in contact with us.”

Numerous other events featuring controversial Republican speakers like Gavin McInnes and Lucian Wintrich have sparked violence or been canceled on college campuses in recent weeks.