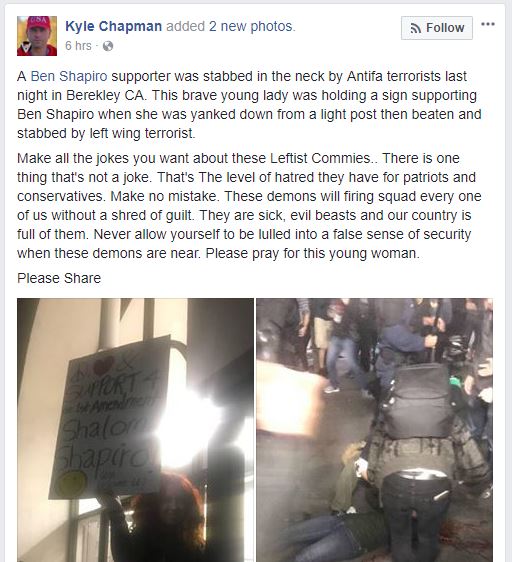 Mediaite reached out to the Berkeley Police Department for an official statement on the incident, to which they responded that they are confident no such stabbing even happened.

“We have received no reports of a stabbing during or associated in anyway with last nights events. There was no stabbing at all in the city of Berkeley last night, let alone on campus. Hundreds of officers were out about, so we are confident that we would have been aware of a stabbing incident,” said Andrew Greenwood, the city’s chief of police.

The Facebook user who spread the story — which has been shared almost 3,000 times since being posted this morning — is named Kyle Chapman, but most internet users will know him as “Based Stickman” due to a video where he is featured attacking members of Antifa.

Chapman’s post claims, “A Ben Shapiro supporter was stabbed in the neck by Antifa terrorists last night in Berekley… [for] holding a sign… when she was yanked down from a light post then beaten and stabbed by left wing terrorist.” The self-described “Proud American Nationalist” and “Ardent Trump supporter” claimed that this story was “not a joke.”

“Make all the jokes you want about these Leftist Commies.. They are sick, evil beasts and our country is full of them. Never allow yourself to be lulled into a false sense of security when these demons are near,” added Chapman.

Interestingly, Chapman once appeared on Shapiro’s podcast, where the conservative pundit heaped praise upon the “alt-knight” for his violent actions done in the name of protecting conservatives at “free speech” rallies. He touts a helmet, goggles, leg protection, a protective mask, a shield, and a pole to these events and was launched into internet fame early this for smashing a sign on an Antifa activist.

Additionally, former Breitbart editor Milo Yiannopoulos aggregated the Facebook post into an article on his personal site — though, clarifying that the story is unconfirmed.

Fox News contributor Tomi Lahren also hyped-up reports of Antifa protests at Shapiro’s event on the conservative network this morning — though the event went on with few incidents.

This article has been edited to add the Milo Yiannopoulos  article on the alleged incident.