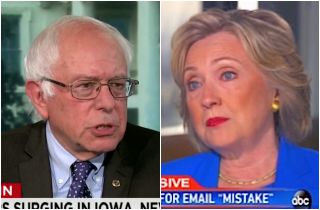 Sen. Bernie Sanders (I-VT) has surpassed Democratic frontrunner Hillary Clinton for the first time in Iowa, according to a new poll released Thursday.

The survey of likely Democratic caucus-goers in the key early primary state further illustrates Sanders’ rise to prominence in liberal circles, particularly in the Hawkeye State, where he once trailed Clinton by double digits.

The Quinnipiac University poll found that Iowa Democrats slightly favor Sanders over Clinton, 41 percent to 40 percent, which is well within the survey’s margin of error. Vice President Joe Biden, who is expected to decide within the next few weeks whether to enter the presidential race, came in third place with 12 percent support. In Quinnipiac’s July poll, Sanders trailed Clinton by almost 20 percentage points in Iowa, 52-33.

Former Maryland Gov. Martin O’Malley, who has been a vocal critic of the Democratic National Committee’s debate schedule, received 3 percent and has not gained much traction to date in the Democratic primary. DNC Chair Debbie Wasserman Schultz on Thursday morning stood by her decision to sanction just six debates, as opposed to the 12 contests the Republicans will participate in.

While Sanders has gained traction in the race with his large crowds and steadily rising poll numbers, Clinton has struggled to respond to the ongoing controversy involving her email practices when she served at the helm of the State Department. Just this week, Clinton apologized for what she admitted was a poor choice to use one email account for work and personal correspondence.

The Quinnipiac poll of 832 likely Democratic caucus-goers, conducted Aug. 27 – Sept. 8, has a margin of error of plus or minus 3.4 percentage points.