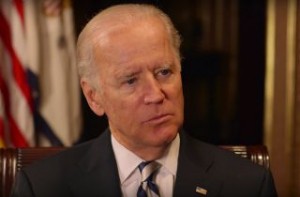 Vice President Joe Biden blasted Republicans who have announced their intention to block any appointment to the Supreme Court while Barack Obama is still in office. Biden said that their stated intention to keep an empty seat on the Supreme Court unfilled for the next year was “absolutely, thoroughly, totally irresponsible.”

Speaking to Minnesota Public Radio in an interview released Thursday, Biden said he believed that it was still possible for President Obama to nominate a centrist jurist who would get appointed to the highest court. “I predict the Republicans will not be able to sustain this position,” he said.

“The Senate gets to have a say, and so in order to get this done the president is not going to be able to go out — nor would it be his instinct anyway — to pick the most liberal jurist in the nation and put them on the court,” Biden said. “There are plenty of judges who are on high courts already who have had unanimous support of the Republicans. This should be someone who in fact is a consensus, and whereby we can generate enough support to get a person passed.”

Given the gridlock in Congress, he said, leaving the third branch of government down one Justice for partisan purposes was a gross abnegation of duty. Leaving the seat vacant, he said, was like saying, “God forbid, something happened to the president and the vice president — we’re not gonna fill the presidency for another year and half.” (For what it’s worth, this isn’t a great analogue — the presidential line of succession is pretty unambiguous.)

Biden recalled his own experience as the longtime chair of the Senate Judiciary Committee, and specifically the appointment of Justice Clarence Thomas, who he noted “ended up with a tie vote in my committee, the Judiciary Committee, meaning that his nomination failed.” Biden said that if he had wanted to invoke Senate rules over the Constitution, “which the Republicans are talking about doing,” he could have kept the Senate from voting on Thomas’s confirmation. “But the Constitution says the Senate of the United States shall decide,” he said. “No majority leader has the right to deny the United States Senate the exercise of their responsibility.” (The Senate narrowly voted Thomas in, 52-48.)