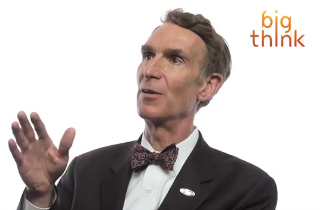 Popular scientist and children’s television personality Bill Nye, a.k.a. “The Science Guy,” took to the web last week to decry biblical creationism and plead with parents who reject the theory of evolution not to force their beliefs on their children.

In a Big Think video titled “Creationism Is Not Appropriate for Children,” Nye explained his belief that America is still one of the most innovative countries in the world because of our “intellectual capital,” but “when you have a portion of the population that doesn’t believe in [evolution], it holds everybody back,” he said.

The scientific theory of evolution contends that all forms of life have evolved over time through a variety of natural processes like natural selection. Belief in creationism, which Nye seeks to dispel, holds that the universe was entirely the creation of a supernatural being.

Not believing in evolution, Nye said, is like “trying to do geology without believing in tectonic plates,” adding that “your whole world is going to be a mystery instead of an exciting place.”

As Reuters points out, a Gallup poll from May of this year found that 46 percent of Americans are “creationists” for their belief that, within the last ten millennia, a supernatural being created humans in their present form. Nye decries such a world view as “crazy” because it ignores scientific processes that involve “deep time” such as radioactivity and the lifespan of stars.

Nye concluded the video by pleading with adults who reject evolution to not force such views upon their children: “I say to the grown-ups, ‘If you want to deny evolution and live in your world that’s completely inconsistent with everything we’ve observed in the universe that’s fine. But don’t make your kids do it.'”

A well-educated generation of students who understand science is essential, he said, adding that “We need them. We need scientifically literate voters and taxpayers for the future.”

Watch below, via Big Think:

Watch Nye discuss the video on CBS This Morning: