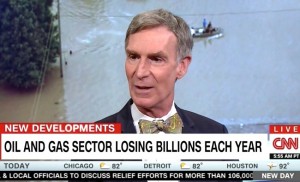 The Science Guy himself Bill Nye was brought in to CNN’s New Day this morning to examine some of the devastating effects of the flooding in Louisiana that has left over 60,000 homes badly damaged.

“As the ocean gets warmer — which it is getting — it expands… [M]olecules spread apart. And then as the sea surface is warmer, water evaporates. And so, it’s very reasonable that these storms are connected to these big effects,” he said, linking the ongoing debate of climate change to the serious consequences around the global community.

The longtime host of the children’s show Bill Nye The Science Guy on PBS continued his educated assault, identifying many of the other issues that stem from climate irregularities. When people are forced to move from their homes as a result of storm damage, for instance, “…then what’s going to happen to all that copper wiring? And all that copper plumbing? Somebody’s going to show up and salvage it, or somebody’s going to show up and loot it, which will lead to all sorts of criminal activity?”

But right before the interview was over, Nye can be seen carefully weighing something in this head. And moments before Cuomo can pull it to a close, the Science Guy blurts out:

“And you know, here at CNN you have, essentially, a climate change denier meteorologist. Knock yourselves out, but this is a big problem and it’s not going to go away.”

The culprit isn’t named, but it isn’t hard to deduce his target: CNN’s Chad Myers, a meteorologist and weather correspondent for the network based in Atlanta who has embroiled himself in controversy for his, at times, denial of emerging climate science.

In 2008, Myers told Lou Dobbs, “To think that we could affect weather all that much is pretty arrogant.” Myers also told CNN’s Ali Velshi in 2010 that TV meteorologists push the hoax of climate change because their jobs would be threatened otherwise:

“The globe is warming, trust me on this one, we know we’re losing ice caps,” Myers admitted to Velshi admitted however.

“Another conversation for another day,” concluded Cuomo simply this morning, doing his best to step over the landmine laid carefully by the Science Guy.

Watch the above interview from CNN’s New Day.