Bill O’Reilly Worries Glee May Be Indoctrinating Our Children 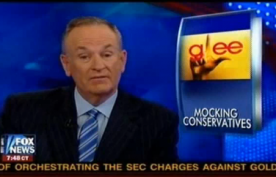 Maybe predictably, someone at Fox News is worried about Glee. If you are a watcher of Glee than probably you already know about Tuesday night’s awesomely themed Madonna episode. If you don’t watch it than the show is probably best described as Gilmore Girls meets Grease meets 90210. There’s a lot of singing, snappy dialogue and a teenage pregnancy. And this week there was Madonna. Quick recap: Sue Sylvester, the utterly genius, take-no-prisoners Cheerios cheerleading coach, decided the girls needed to up their self image by listening to Madonna (more like absorbing Madonna…complete with younger boyfriends) which sends the entire high school into fits of Madonna performances (go watch here, that’s basically all the preamble you need to catch up).

Anyway, how Glee managed to land itself in the O’Reilly cable sphere last night is that in the course of the guidance counselor bemoaning the lack of positive female role models for young women these days, she name-checks Ann Coulter.

“You’ve got Britney Spears and her shaved head. Lindsey Lohan looks like something out of Lord of the Rings. Ann Coulter.”

And later, Sue Sylvester (arguably the best thing about the show) tells two Cheerios “you must be two of the stupidest teens I have ever encountered, and that’s saying something…I once taught a cheerleading seminar to a young Sarah Palin.”

I think you can probably see where this is going. Glee may be indoctrinating our children. O’Reilly actually says this, though not nearly with the conviction that Glenn Beck normally applies to similar arguments. Moreover, O’Reilly wants to know why television shows (notwithstanding 24) only make fun of conservatives and not Dems. Fox News host Jane Skinner, playing the role of the voice of reason here, points out that both 30 Rock and the Simpsons have taken hits at Dem Presidents (Obama and the Clintons, respectively) moreover, she’s not offended by Glee’s references (the raison d’etre of Sue Sylvester, by the way, is to be offensive) and says if you want “fair and balanced” television this is it. Also, kids get it. Actually, the kids apparently don’t care, though, if Glee’s ratings are anything to go by, the GOP might consider putting their political platforms to music in order to make some inroads with the under 25’s. Video of exchange below. Full episode of Glee here. (Best line of the night: “I said it first. The Palladium, 1987.”)