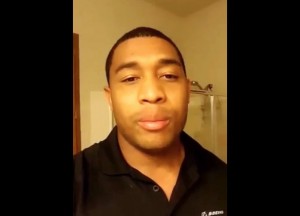 Even as the #SaferThanATrumpRally hashtag blows up on Twitter, at least one man is promoting a more positive view of Donald Trump’s rallies, and the supporters he encountered there. Tucson police officer Brandon Tatum attended a Trump rally this past weekend to try and make up his own mind about the candidate, and the video he made describing his experience there has gone viral on Facebook.

Tatum, a former supporter of Ben Carson, said he was shocked at the “verbally violent” protesters who he said treated him “like a criminal,” and that the Trump attendees were not initially adversarial with them.

“These people were the most hateful, evil people that I’ve ever seen,” Tatum said of the protesters, while he found the Trump supporters to be restrained. “I’m an African-American man,” he said, “and I had no problems with people there going against me or wanting to hurt me.”

My experience at Donald Trump's rally in Tucson, AZ. #PressPlay*I'd like to add that after further investigation the protester that was punched did not provoke the other male, according to authorities. I don't need to state the obvious regarding my stance on assault.

During the video, Tatum described an incident in which he said a protester either hit or spit on someone and “got his tail kicked,” but he later updated his post to read “after further investigation the protester that was punched did not provoke the other male, according to authorities.”

Tatum’s video is fast approaching one million views on Facebook.