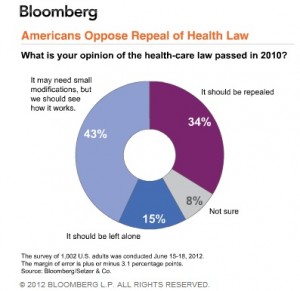 Bloomberg News has released another round of results from their newsmaking poll of likely voters this week, this one focusing on the Affordable Care Act, some of which could soon be struck down by the Supreme Court, and which Republican Mitt Romney has promised to repeal if elected president. The poll shows that while a significant number of likely voters would like to see small changes to the law, an overwhelming 58% are opposed to its repeal.

Republicans have pledged to “repeal and replace” President Barack Obama’s health-care overhaul. If the U.S. Supreme Court strikes down the law, they may struggle to deliver on the second part of their vow.

A plurality of Americans, 43 percent, say they want to retain the 2010 law with only small modifications, while 15 percent say the measure should be left alone, a Bloomberg National Poll shows. One-third say it should be repealed.

…One belief unites most Americans: 71 percent say politics will influence the Supreme Court’s decision, with just 20 percent saying the court will decide solely on legal merits. Five justices are Republican appointees, and four are Democrats.

The poll of 1,002 adults has a margin of error of plus or minus 3.1 percentage points. It was conducted by Des Moines, Iowa-based Selzer & Co.

While conventional wisdom says that a Supreme Court decision against the law will be a political blow for the President, his poll illustrates the political benefits of the law. Certain provisions of it are so popular, Republicans are going to have a very hard time getting rid of them, and one of the most popular depends on the idea of universal enrollment that the endangered mandate now fulfills.

The provision that prohibits insurance companies from denying insurance based on a preexisting condition is one of the most popular, but without a mandate, or some other form of theoretical universal enrollment, that provision cannot stand. Healthy people would just wait to get insurance until they got sick, but pay the same amount as those who maintained insurance all along. That’s roughly the same as letting someone buy into your lottery pool only after they knew you had won.

In such a situation, it wouldn’t be long before insurance companies were begging for a public option, or Medicare for all, to deal with all the freeloaders. A cynical person might think that this was the plan all along, to give people extremely popular benefits that could only be sustained with true universal health care, not a constitutionally vulnerable mandate.

The only problem is that the mainstream media is letting Republican presidential candidate Mitt Romney get away with pretending he has an answer to preexisting conditions, when what he’s proposing is the same thing we already had before Obamacare. He has repeatedly said that “If people have been continuously insured, and then they decide to change jobs or change locations, they should not be denied coverage if they go to a new place or have to get a new policy.”

Health care is an extremely complicated issue, so even if the President’s campaign decides to run on health care, there’s no guarantee they can explain this to people before their eyes glaze over.