Bobby Jindal: The Only One To Benefit From The Oil Spill? 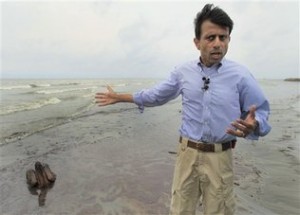 It was only a little more than a year ago that Bobby Jindal, Louisiana governor, was pegged as the savior of the GOP. He was asked to give to Republican response to the President’s speech on the economy as many believed that he was the Republican’s answer to Pres. Obama. After his speech aired, he was instead seen by many as the politician’s answer to Kenneth from 30 Rock. Soon after, the derided Jindal seemed to disappear from the national spotlight. However, an Associated Press article today wonders whether the governor’s increased media exposure following the oil spill and his dogged leadership throughout will turn his reputation around.

Jindal has been all over the news recently and has made it a point to appear competent, passionate, and in command, qualities that many found lacking in the state’s former leaders during Katrina. He has also been very vocal in his opposition of Obama’s handling of the current crisis, recently asking for an end to the moratorium on deep water drilling. However, the shadow cast by his speech last year is long.

“The Republican’s rapid-fire command of facts and determination to lead are his second act on the national stage — and a chance to erase the memories of his pedantic, sing-songy rebuttal of President Barack Obama’s first speech to Congress in February 2009. The 38-year-old, Oxford-educated political prodigy was widely criticized, and suddenly didn’t seem like presidential material as he once did.
“His reputation still hasn’t overcome that speech,” said Ed Chervenak, political science professor at the University of New Orleans.”

This is all important because Jindal was once seen as a clear GOP presidential pick. While the article points out that Jindal recently told Republicans that he would not run, he’s also been making many fundraising appearances throughout the nation. Besides, we all know that an upcoming politician who claims they’re not running for president is as easy to believe as a car salesman promising that you need that last warranty.

Even if Jindal’s response to the oil spill blocks out the old memories, it may inspire more problems as well.

“Some Democrats have derided Jindal’s trips as nothing but photo opportunities.
“Getting on a boat in a lifejacket and pointing out the oil on the shore is not being a leader,” said state Sen. Karen Carter Peterson, a New Orleans Democrat.”

While those quotes from the AP article imply that Jindal may be an opportunist, some readers commenting on the New Orleans Times-Picayune are flat out saying it. If Jindal’s future political opponents are able to insinuate that Jindal was working for himself just as much as his state during this crisis, it could ruin any new reputation that he’s able to make for himself.

Right now, Jindal can’t worry about any of this. He has a state to save. But, if he tries to move upward in the future, he’s going to have to hope that the media plays more clips of a leader like the one seen in the video below.