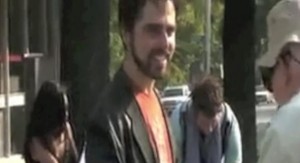 The progressive Brave New Foundation has just finished their Koch Brothers: Exposed documentary, which takes aim at the energy billionaires who have pledged to spend $100 million to defeat President Obama. In an odd move, Koch industries is doing a bit of guerilla marketing for the film, posting a YouTube clip of a BNF activist leaving a voicemail inviting the bros to view the film, then forgetting to hang up, and bantering to a co-worker that the Kochs “eat babies,” later clarifying it to “soft-boiled babies.”

Brave New Foundation is the brainchild of filmmaker Robert Greenwald, best known for his documentary OutFoxed, which explored the agenda of Fox News before it was cool. Apparently, Brave New Foundation operative Jesse Lava called Koch Industries to offer them an opportunity to view, and respond to, their film, which Koch Industries considers a “harassing phone call.”

When he’s done leaving his message, though, Lava thinks he has hung up, and when a co-worker asks him “What do you think Charles Koch eats for breakfast?” Lava replies “Babies,” then, to his co-worker’s laughter, adds “yeah, like, soft-boiled babies.”

If they’re interested, I have a great hollandaise recipe to go with that. I use the “whole butter method,” which I think makes for a richer sauce.

Lava also posits “scrambled babies” as a Koch breakfast staple, and his co-worker asks him to call back and do another take, because there was “too much sirens when you were talking.”

Here’s the video, from KochFactsTV:

Now, granted, it is very funny that the guy thinks he hung up, and engages in the kind of pitch-perfect Kock-bashing that everyone already suspects liberals do among themselves, and I’m all for a good bit of internet back-and-forth, but what I really love is Koch’s indignation, the doe-eyed shock that a liberal activist would be so mean!

It’s also a little weird that this bit of viral mayhem comes, not from the Koch brothers themselves, but from Koch Industries, who have shown a propensity for thin skin (the key, I’m told, to a good soft-boiled baby) in the past, punching down at a Rachel Maddow Show producer for highlighting their efforts to kill job-creating legislation. Set aside the fact that both efforts serve only to make their targets even bigger heroes with their own audiences (what liberal is going to go “Ha-RUMPH!” and throw away all of their Brave New Films DVDs?), this is just strange behavior for a huge corporation to be engaged in.

If more companies responded to critics like this, though, the world would be a more interesting place. I look forward to the Chris Crocker “Leave the Kochs alone!” video that’s sure to come.