Breaking: Another Oil Rig Explodes Off Coast Of Louisiana (UPDATED) 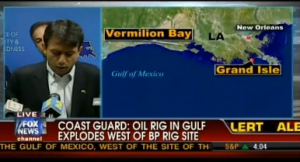 This is pretty much the last news you want to hear coming out of the Gulf. CNN is reporting that another oil rig has exploded off the coast of Louisiana. Details are still sketchy but here’s what they have so far:

Update #2. More facts emerging regarding the rig explosion. A mile-long oil sheen has reportedly been spotted near where the explosion took place. Get ready for the ‘drill baby drill’ debate to shift into high gear. Below Gov. Jindal addresses the press. From the NYT:

All 13 members of the work crew on board Thursday were accounted for, the Coast Guard said, though the injured worker’s condition was not immediately known. The crew were pulled from the water by a civilian boat that had been in the area, the Crystal Clear, and taken to a nearby rig, Coast Guard officials said.

Rescuers, who arrived about an hour after receiving reports of the explosion, took the crew to Terrebone General Medical Center in Houma, La.

It was unclear whether the platform was in danger of foundering, or whether the explosion had set off any oil leaks.

Government officials said the Mariner platform had not been involved in any recent oil and gas production, and that it had been undergoing maintenance work. The platform was not affected by the Obama administration’s recent ban on deepwater oil drilling, imposed in the wake of the BP spill.

An oil rig has exploded 80 miles off the coast of Louisiana, with 12 people overboard and one missing, the Coast Guard said Thursday morning.

Update: U.S. Coast Guard Petty Officer Bill Colclough tells CNN that all 13 workers involved in the rig explosion are accounted for, but one person is injured.

Rescue attempts are under way for at least 12 people, Coast Guard spokesman John Edwards told CNN. 13 people were on board the rig total, Edwards said, noting 12 have been accounted for, but one person was missing.

The accident took place 80 miles off the coast of Louisiana on the Vermilion Oil rig 380, which is owned by Houston-based Mariner Energy.

The Coast Guard has multiple helicopters, an airplane and several Coast Guard cutters en route. It’s unknown if there are any injuries.

The platform owned by Mariner Energy (NYSE:ME) is in about 2,500 feet of water, the Coast Guard said, and was not currently producing.