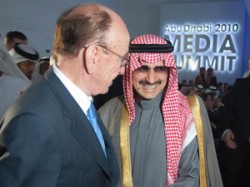 Regulars watchers of Stewart will likely already know this (regular watchers of Fox, not so much) but Saudi Prince Al-Waleed bin Talal, the man who once offered Mayor Rudy Giuliani $10 million, is both the second-largest holder of voting stock in News Corp. and a person who has “given generously to initiatives pursued by the imam, Feisal Abdul Rauf.” Perhaps equally as interesting considering the tone of the coverage is the fact Rupert Murdoch is a great admirer of the Prince.

In a 2005 documentary about the prince, Murdoch called Waleed “very shrewd, very analytical, yet at the same time prepared to gamble — and to go against sort of the prevailing thoughts about markets.”

The prince had long been Murdoch’s business partner in News Corp. — but that year he arranged a share swap in which he obtained more than 30 million voting shares.

As for how the Prince feels about Fox coverage, Al-Jazeera anchor Riz Khan tells Folkenflik he’s pragmatic saying: “Look, I’m not there to direct the news policy, I’m there to invest in News Corp. — and hopefully they’ve got some sense to do news properly.”

Not that you will hear about any of this on Fox: “That exchange involving Fox’s Senor was the only one this reporter could find on Fox News that made direct reference to the prince. But Senor did not name Waleed — nor was the prince mentioned in any of the speculation about the financing for that proposed Islamic center in Lower Manhattan.”