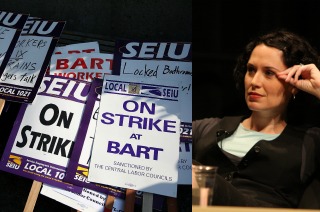 Perhaps you have been following the kerfuffle surrounding technology entrepreneur Sarah Lacy who recently incurred the wrath of a panting legion which fancies itself defenders of the faceless proletariat when she dared criticize San Francisco’s transit workers for going on strike. Lacy’s sin, presumptuously criticizing the slothfulness that unionization repeatedly — seemingly inevitably — leads to and to canonize the values of meritocracy, hard work, thrift, and self-reliance that serve as the philosophical moorings of tech culture in Silicon Valley is apparently worthy of derision and snark from her contemporaries. But snark and derision is all they have. The facts of the matter are on Lacy’s side.

Lacy recently gave this quote to a reporter for Marketplace.org which set the world aflame:

“If I had more friends who were BART drivers, I would probably be very sympathetic to their cause, and if they had more friends who were building companies they would probably realize we’re not all millionaires, and we’re actually working pretty hard to build something. People in the tech industry feel like life is a meritocracy. You work really hard, you build something and you create something, which is sort of directly opposite to unions.

Such indecorum. Such galling immodesty. Worse still, a departure from accepted norms and mores to which all proper young techies should genuflect… in public, at least. Lacy must be denounced.

And so she was:

“Had to literally get up and walk away from my computer at the second Sarah Lacy quote,” tweeted New York Magazine’s business writer Kevin Roose, apparently incapacitated with disgust after reading the offending quote.

“San Francisco used to be a great city, and now it is populated by Fountainhead enthusiasts who know how to run everything,” The Awl’s Choire Sicha bleated.

The tech visionary’s quote is so offensive that it has single-handedly destroyed the reputation of a once-great American metropolis. Evidently, Lacy– having become death, the destroyer of worlds — elicits concepts and emotions powerful enough to make Oppenheimer blush.

But the best and most hyperventilating reaction comes from Gawker’s Sam Biddle. “How dare the transit workers have made life inconvenient for the only people who really matter, the ones who are changing the world with their startups?” he sneered. But Biddle did not stop there.

“For Lacy and the rest of the techno-libertarian goon squad, it’s a matter of moral progress,” Biddle ill-advisedly continued. “A meritocracy! A meritocracy, in which anyone with a dream, a rarified education in computer science, and the kindness of a millionaire investor can make it.”

Fortunately Lacy isn’t friends with any of the slobs who spend their days operating (or riding!) the trains instead of engineering a website to make the trains obsolete—so their needs don’t register with her. Her friends are on the other side, in the industry she’s ostensibly covering. “We,” not “they.” She’s one of them—they’re just like her, and everyone else is just a clog in the disruption stream.

The garment-rending continues – feel free to read the whole post. I recommend it for the edifying glimpse into how some react to the deeply offensive and blasphemous concept of self-sufficiency. None of Lacy’s critics include, however, the statistics which were a part of the Marketplace article in which she was originally quoted.

“A BART worker’s base salary is about $60,000 a year. Sounds pretty good, but it’s less than the $74,341 a family of four needs to get by in the pricey Bay Area,” the article notes. But the article does not, however, note that the high number of legacy employees working for BART make the base salary a moot figure.

BART workers make an average of $130,000 per year ($80,000 of that in salary and the rest in benefits) according to Bay Area Council President Jim Wunderman. Furthermore, their contracts stipulate that each employee is offered an annual 8 percent raise – a benefit denied many private sector employees in the new economy. Their epic struggle against historic forces of oppression seeking to deny the BART workers their demand for a 21 percent annual salary bump notwithstanding.

Biddle’s overwrought worry for the BART employees that make up the soot-stained working masses which hoist San Francisco onto their feted shoulders each day is betrayed by his lack of concern for the working men and women who were displaced by the BART strike.

The city – e.g. the taxpayers – were saddled with the burden of paying for the massive traffic jams which resulted from the BART strike. Aside from the personal expenses which commuters had to absorb just to get into work – funds that would otherwise have purchase any number of products from hardworking vendors and service providers — National Review’s James Sherk reports that the strike cost San Francisco $73 million per day. Those costs don’t disappear, folks. Somebody pays that tab.

But Lacy was not arguing these facts or the merits of the strike. She may even sympathize with some of the striking workers complaints. All she said that incurred such an overreaction was to dare to suggest that the values of an entrepreneurial culture should be valued. She is correct; her critics are wrong.

These educated and successful technology and business writers are railing against the idea – though guised as an attack on an effete person of means lamenting a slight inconvenience – that an inferior product which consumers are compelled by government-enforced monopoly to patronize should face some competition. Such is the sad state of contemporary thought leadership in some sectors of American society. Fortunately, these minds are only developing consumer products and not systems of social organization… yet.