Brian Williams in 2007: ‘I Looked Down the Tube’ of RPG in Iraq
video 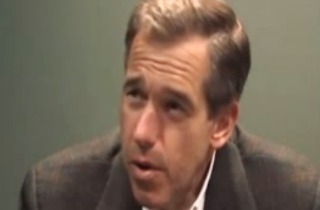 So here’s another wrinkle in Brian Williams‘ years of telling different stories about being in Iraq: in 2007, he said he actually looked down the tube of the RPG that fired at another helicopter.

This came from an interview Williams did a few years ago with Fairfield University student media. Student reporter Emily Fitzmaurice asked him about the stories that have had the biggest personal impact on him. Williams ran off a list, recalling when he was nearly hit by rockets in Israel and when he was covering Hurricane Katrina (and his account of what happened there is also being questioned for its accuracy).

RELATED: Why NBC Shouldn’t Even Think About Firing Brian Williams

But he also invoked his now-infamous helicopter trip over Iraq and said this:

“I looked down the tube of an RPG that had been fired at us and it had hit the chopper in front of ours. And I’m so fortunate to be sitting here.”

But the line about looking down the tube of the RPG does seem awfully specific, considering Williams apologized this week for getting that story so wrong for so long.