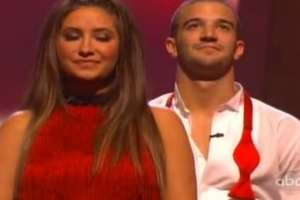 Bristol Palin has recently emerged from the shadow of social media supernova Sarah Palin, generating Facebook heat of her own. Over the weekend, the Dancing with the Stars 2nd runner-up responded to comedian Margaret Cho‘s claim that Mama Grizzly Sarah forced Bristol to enter the dance competition as penance for losing the 2008 election.

Ms. Palin dispels that notion in a good-natured post that leaves the door open to friendship with Cho (complete with baby-sitting job offer), but she misses big by suggesting that Cho “embrace us faster than KD Lang at an Indigo Girls concert.”

Bristol begins by suggesting that her mother was slightly reluctant to have her daughter appear on DWTS, underscored by a reference to Three Dog Night’s Mama Told Me Not to Come. She cannily attacks Cho’s claims on a logical basis, describing the main reasons the McCain/Palin ticket failed, and correctly concluding, “I seriously doubt anyone who considers herself a student of American politics truly believes I impacted even one vote in that election.”

While Bristol applies a commendably light touch that’s missing from many of her famous mother’s social media outbursts, her good intentions can’t paper over this apparent break with reality:

You say you “don’t agree with the family’s politics at all” but I say, if you understood that commonsense conservative values supports the right of individuals like you, like all of us, to live our lives with less government interference and more independence, you would embrace us faster than KD Lang at an Indigo Girls concert.

Palin is referencing the fact that Cho is a longtime advocate for gay rights, and an icon in the LGBT community, but it’s hard to say what is supposed to spur that hypothetical embrace. Sarah Palin’s commitment to “individual liberty” includes support for a constitutional amendment to ban gay marriage, opposition to the repeal of DADT, and a dismissive attitude toward the use of anti-gay slurs.

While much has been rightly made of President Obama’s Frankenstance on gay marriage, there is an important difference between his “don’t believe in it, but don’t wanna ban it” stance and Palin’s. Only one of them can claim, however weakly, to support “less government interference.”

Even in missing the mark, though, Bristol comes off as someone who’s reaching out, offering this good-natured postscript:

P.S. If you want to baby-sit Tripp, I could use a night off.

Bristol Palin is still very young, but it looks like her time in the DWTS spotlight has served her well, Breaking away from her famous mother’s orbit might be a very slow process, but the maturity she displayed in dealing with Keith Olbermann‘s “Worst Persons” award and her embrace of safe sex alongside abstinence are encouraging signs. People like Cho and Kathy Griffin would do well to cut her some slack.