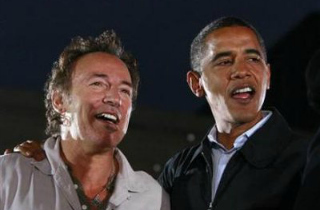 Earlier this week, I criticized one of my musical heroes Bruce Springsteen for re-endorsing President Barack Obama despite the fact that the president has continued nearly all of the “un-American” civil liberties policies that The Boss rightfully lambasted under George W. Bush‘s presidency.

I argued that Springsteen should have at least given a qualified endorsement, making clear that he is disappointed in the president’s failures but believing that perhaps he is still better than the “greater of two evils” in GOP candidate Mitt Romney (I’m inclined to believe evil is evil, and neither are worth my vote). Or perhaps he should have endorsed a third-party candidate who is more aligned with his professed views.

However, on his official website Wednesday evening, Springsteen posted a 600-word explanation for his endorsement of the president. And the letter conveniently (and unsurprisingly) glosses over the exact civil liberties hypocrisy pointed out here.

In the letter, Springsteen acknowledged that the 2012 Obama is much different than the 2008 Obama: “Last time around, [Obama] carried with him a tremendous amount of hope and expectations. Unfortunately…”

Did he address the administration’s unfortunate back-turning on its civil liberties promises? The continuation of illegal wiretapping? Rendition? Executive overreach?

Nope. Springsteen went the predictable partisan route: “…due to the economic chaos the previous administration left him with, and the extraordinary intensity of the opposition, it turned into a really rough ride. But through grit, determination, and focus, the President has been able to do a great many things that many of us deeply support.”

Springsteen then cites several domestic “successes” like “guaranteed health care” (which, in reality, is tantamount to corporate welfare for large insurers… but whatever) and professed support for gay rights, among other examples. The ending of “Don’t Ask, Don’t Tell” and the president’s declaration of support for same-sex marriage (despite it being a cynical political move) were, indeed, good things.

But what about foreign affairs? What of the civil liberties issues listed above? You know, the ones Springsteen spent hundreds of nights ranting about while on tour for his Magic album during the Bush administration.

“In foreign affairs, that record includes following through on the removal of troops from the misguided and deceptive war in Iraq, and vigorously pursuing our real foreign enemies, especially the killing of Osama Bin Laden.”

Well, it would’ve been hard for Obama to not follow through on the troop removal from Iraq, given that his predecessor had signed a “status of forces agreement” in late 2008 that said we’d remove our troops by a 2011 deadline. Interesting that Springsteen ignores the fact that “the president ultimately had no choice but to stick to candidate Obama’s plan — thanks, of all things, to an agreement signed by George W. Bush.” But ultimately, yes, let’s praise the demise of that detestable war — regardless of who is in charge.

But wait a minute. Let’s not get distracted. Did Springsteen address the continuation of wiretapping? Rendition? Drone strikes? Indefinite detention? Anything?

Instead, he continued on to blast Republicans for their “voter suppression” efforts in various states. And then he offered praise for the “sterling” Democratic Senate candidates in Sherrod Brown and Elizabeth Warren.

Given the theme of his recent Wrecking Ball album, Springsteen then railed against income inequality. The rich are getting richer and the poor are getting poorer, lamented Mr. Boss Man, and so “President Obama is our best choice to begin to reverse this harmful development.”

He then waxed poetic about equality for all citizens, regardless of color or creed. Again… nice touch, but still conveniently ignoring some of the gaping flaws at hand.

So no… in the end, not a single mention of the very civil liberties abuses Springsteen railed against during the Bush years. Not even a nod. Not even a subtle lamentation that this president has utterly failed to end those practices.

Again — I get it. Springsteen likely sees this as a choice between the “lesser of two evils,” but of course he won’t say that aloud. But he could at least acknowledge the failures, instead of giving the usual partisan spiel about how Republicans are awful and if only Obama had accomplished more! His silence on civil liberties is hypocritical, given how outspoken and “principled” he was during the Bush administration.

But whatever. I’ll just keep my fingers crossed for a release of those Electric Nebraska tapes.